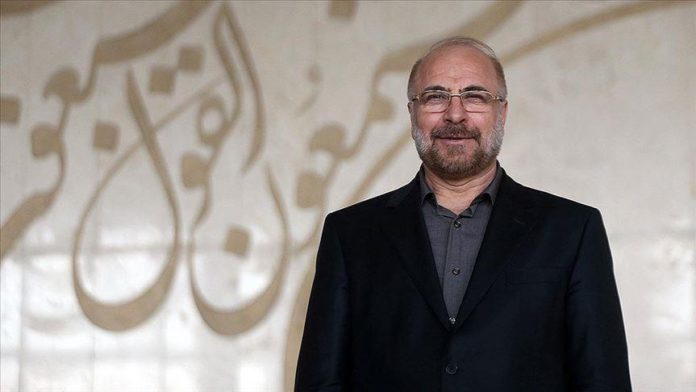 The meeting, according to senior Iranian lawmaker Mojtaba Tavangar, was shelved after Mohammad Baqer Qalibaf refused to accept the health protocols to be followed during the meetings with the Russian leader.

Leading a high-level delegation, Qalibaf was expected to convey a message from Iran’s Supreme Leader Ali Khamenei to Putin, the contents of which have not been disclosed.

He will now deliver the message to the Russian leader through his special envoy, the lawmaker confirmed Saturday.

Putin, according to reports, remains confined to a virus-free bubble with very few people allowed to have face-to-face interactions with him, which also requires they be quarantined.

Tavangar said the main agenda of Qalibaf’s three-day visit to Moscow, starting Sunday, would be to boost Tehran-Moscow economic cooperation, including exports of oil to Russia and other regional allies.

He also said the speaker would carry a message to Putin from Iran’s Supreme Leader, which sources say could be about changing regional dynamics in the wake of the change in leadership in the US.

Qalibaf’s visit to Moscow comes amid continued uncertainty over the fate of the 2015 Iran nuclear deal, with neither Tehran nor the new US administration willing to make the first move.

Tehran has ruled out renegotiations on the deal, calling on Washington to return to its commitments under the pact, officially known as the Joint Comprehensive Plan of Actoin (JCPOA), while Washington wants Tehran to return to full compliance first.

Iran’s parliament has set Feb. 21 as a deadline for the administration of President Joe Biden to lift sanctions, warning that it would halt inspections by the UN nuclear watchdog and further accelerate uranium enrichment.

Qalibaf’s visit to Moscow comes days after Foreign Minister Javad Zarif’s whirlwind trip to the country where he held talks with his Russian counterpart and discussed the JCPOA and regional cooperation.

Touted as one of the presidential hopefuls in an upcoming June ballot, Qalibaf’s political career has been resurrected since his conservative alliance swept the parliament in elections earlier this year.

He is also considered to be close to Iran’s Supreme Leader, an impression reinforced by the “important message” being conveyed through him to Moscow.

There have been significant disagreements between Rouhani’s reformist government and the conservative-dominated parliament led by Qalibaf on issues of resisting US sanctions.

The two have adopted diverging approaches to the issue, especially on a recent “strategic plan” by parliament, which called for accelerating nuclear activities to “neutralize” the impact of the sanctions.

Government officials initially opposed the plan, but approval by the country’s top supervisory body, the Guardian Council, eventually turned it into law, obliging the government to implement it.

While economic cooperation between Tehran and Moscow in the wake of easing tensions between Iran and the US is likely to figure in discussions between Qalibaf and Russian officials, observers say the 2015 nuclear pact and Biden’s regional policy will also be part of the deliberations.