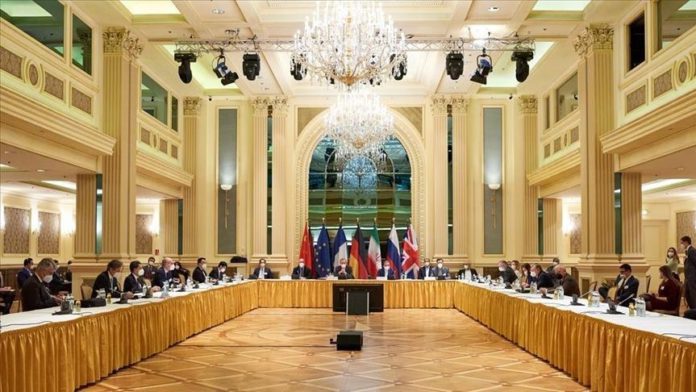 Ending weeks of speculation, Iran said Monday that the Vienna talks on reviving the 2015 nuclear deal will resume under the new government in Tehran.

Foreign Ministry spokesman Saeed Khatibzadeh said Tehran has informed the P4+1 group (Russia, China, France, UK plus Germany) that the next round of talks will be held after the transition of power in Iran.

The new Iranian government headed by former judiciary chief Ebrahim Raeisi, an ultraconservative figure, will take over from the Hassan Rouhani’s reformist government in the first week of August.

Iran and other co-signatories of the 2015 Iran nuclear deal have so far held six rounds of talks in the Austrian capital. While both sides have noted “progress” in the marathon parleys, disagreements on key issues have prevented any meaningful breakthrough.

There has been intense speculation over the next round of talks, with the US and Europeans urging Iran to return to Vienna while Tehran calling Washington to return to its commitments under the nuclear accord.

Khatibzadeh blamed Washington for “not returning to its obligations” under the UN Security Council Resolution 2231, which governs the 2015 nuclear deal, during the six rounds of talks.

He said many disagreements remain between the two sides, putting the onus on the Americans to “take the political decision”.

Iran’s deputy foreign minister and lead negotiator Abbas Araghchi said in a tweet on Saturday that Iran was in a “transition period” and Vienna talks “must thus obviously await” the new administration.

According to observers, the new conservative government’s approach to the talks is likely to be different and uncompromising from the incumbent government, which might put more hurdles in the path toward peace and reconciliation.

Khatibzadeh also spoke about stalemate over a prisoner swap deal between Iran and the US and UK, saying the talks were held in Vienna in parallel with the nuclear deal talks, which “yielded results”.

But, he added, the US tried to link “the humanitarian issue” with the nuclear deal talks, terming it a “wrong approach”.

Last week, government spokesman Ali Rabiei said negotiations on the exchange of prisoners with the US administration were underway, reaffirming readiness to release all Americans languishing in Iranian jails in exchange for Iranians imprisoned across the world at the behest of the US.