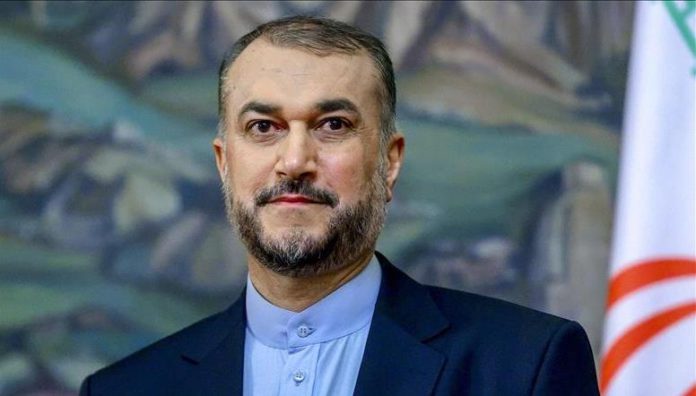 Iran’s top diplomat, on his first official visit to China, announced the implementation of the ambitious 25-year strategic agreement between the two countries has begun.

Foreign Minister Hossein Amir-Abdollahian, following extensive deliberations with senior Chinese officials during his two-day visit to Beijing, said on Friday the two sides agreed to announce the start of the implementation of the long-term pact.

Speaking to reporters in Beijing after his meeting with Chinese counterpart Wang Yi, Amir-Abdollahian said the two countries have made “adequate arrangements” to set the agreement in motion, hailing it as “one of the important achievements” of the trip.

It was the top Iranian diplomat’s first visit to Beijing since assuming office in September. He also carried a letter from President Ebrahim Raisi to Chinese leader Xi Jinping.

‌‌The $400 billion agreement between Tehran and Beijing was signed on March 27 last year by then Iranian Foreign Minister Javad Zarif and Wang during latter’s visit to Tehran.

The agreement includes economic and cultural interaction between the two sides and also paves the way for Iran’s participation in the Belt and Road initiative, a massive infrastructure project stretching from East Asia to Europe.

The accord had last year stirred up a hornet’s nest in Iran as many feared that it would open up Iran’s strategic ports to Chinese investments and military bases. However, officials have dismissed these reports.

The agreement was envisaged in 2016 when Chinese leader Xi Jinping visited Iran soon after a nuclear deal was signed between Iran and the world powers.

However, after the US withdrawal from the deal in May 2018, followed by the reinstatement of sanctions, the Iran-China agreement was also put on the backburner.

On Friday, Amir-Abdollahian said on Twitter that he was “very happy” to begin the new year with an official visit to China, saying the issues that came up for discussion included the strategic agreement and ongoing nuclear talks in Vienna.

Before embarking on the visit, Iran’s foreign minister published an article in China’s state-run daily, Global Times, hoping that the visit “will be a promising new horizon for our promotion and development of cooperation in various domains.”

Relations between Tehran and Beijing have seen drastic improvement in recent years amid growing tensions with the US.

Many see the long-term pact between the two countries as an attempt to circumvent US sanctions on Iran, even as efforts are underway in Vienna to have the sanctions eased.