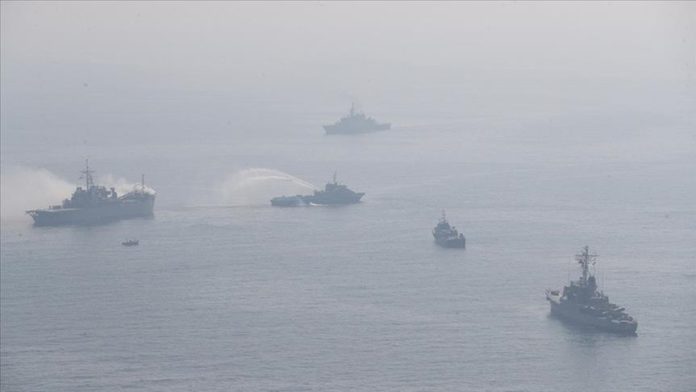 The navies of Iran, Russia and China kicked off a new round of joint maneuvers, dubbed 2022 Maritime Security Belt Exercise, in the northern shores of the Indian Ocean on Friday morning.

Under the command of Iran’s homegrown Jamaran destroyer, pre-determined surface targets in the sea were struck on Friday, according to state media.

The military drill over an area of ​​17,000 square kilometers includes marine and airborne units of Iran’s Navy, Iranian Revolutionary Guard Corps (IRGC) naval forces as well as the naval units from China and Russia, under the slogan ‘Together for Peace and Security.’

Rear Adm. Mostafa Tajeddini, a spokesman for the exercise, said the drills would involve tactical exercises like rescuing a floating vessel, freeing a hijacked vessel, shooting at air targets etc.

It is the third joint naval exercise between the three countries, which first began in 2019 in the Indian Ocean and the Sea of Oman.

According to Tajeddini, the drills are aimed at “strengthening the security of international maritime trade, combating piracy and maritime terrorism, exchanging information in maritime rescue and exchange of operational and tactical experiences.”

The decision to choose northern Indian Ocean as the venue of drills, he noted, was due to presence of important waterways and straits of Bab al-Mandeb, Malacca and Hormuz, described as golden triangles, also due to the fact that the Sea of Oman and North Indian Ocean are deemed crucial trade areas.

In his speech to Russia’s State Duma on Thursday, Raisi reaffirmed his country’s commitment to bolster security and economic cooperation with Russia and other friendly neighbors.

He lashed out at the US and NATO, accusing them of “infiltrating various geographical areas with new coverings that threaten the common interests of independent states.”

He also extended an olive branch to world countries, saying his government’s “policy of maximum interaction with independent governments will continue regardless of the developments in the international environment.”

Iran has already inked a long-term strategic cooperation agreement with Beijing and a similar comprehensive pact with Russia is on the anvil, most likely to be finalized in the coming weeks.

The growing military cooperation between the three countries, according to security affairs analyst Sobhan Hosseini Moghaddem, is in line with rapidly changing geopolitical and security dynamics.

“After the US withdrawal from Afghanistan, Russia and China have begun to assert themselves more forcefully than ever, and at the same time the US has been attempting to increase its influence in the Persian Gulf as well as Indo-Pacific region,” he told Anadolu Agency.

He said the ongoing military drills had “multiple objectives”, most importantly to “contain US influence in the region” and to “build a strong military alliance.”

Tensions between the US and Russia have heightened recently over Ukraine as well as Kazakhstan, with both sides engaging in brinkmanship.

At the same time, China’s relations with Washington have also deteriorated over a range of issues, most importantly Taiwan and South China Sea.

“In view of these developments, it is only natural that Iran, Russia and China, with a common cause, would bolster their military cooperation,” said Fereydoun Dehgahi, a strategic affairs expert. “It is a way of telling Americans that we are united against you and your allies.”

He, however, added that Americans are “very unlikely” to be disconcerted by it, while also ruling out the possibility of a military confrontation between them.