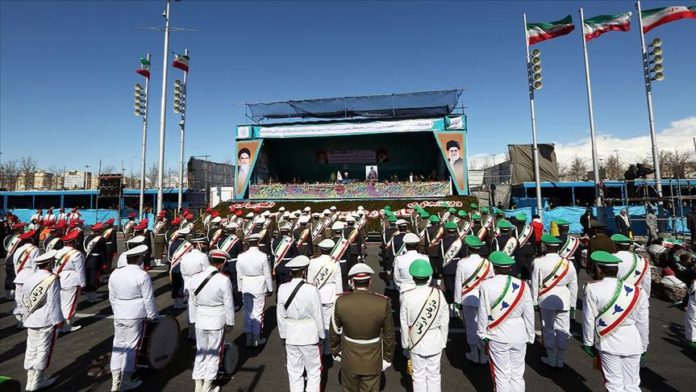 Forty-two years have passed since the Feb. 11, 1979, Iranian revolution — one of the most important events in political history which led to a major social transformation in Tehran and the Middle East.

Relations between Iran and the US have been tense since the occupation of the US Embassy in Tehran and a hostage crisis.

The American administration stopped oil imports from Iran on Nov. 12, after embassy employees were taken hostage by the Islamic Republic.

Iranian assets of about $8 billion were frozen on Nov. 14 by the US.

The US has continued sanctions against Tehran since the 1979 revolution.

Iranians hope that long-standing sanctions, which were tightened under the administration of Donald Trump, might be eased under new US President Joe Biden.

But the dispute between Washington and Tehran about sanctions, Iran’s missile program, a nuclear agreement, and regional issues have not subsided.

In his first interview since taking office last month, Biden said his administration would not ease sanctions to get Tehran back to the negotiating table after Trump pulled out of the 2015 nuclear accord with Iran and reintroduced sanctions related to its nuclear program.

Biden’s comments to the CBS network indicate the current standoff would continue with Supreme Leader Ali Khamenei, who demanded Washington lift sanctions before his country returns to its obligations under the deal that saw it curtail uranium enrichment.

The Trump administration reinstated economic sanctions against Iran while pulling the US out of the Joint Comprehensive Plan of Action (JCPOA), also known as the Iran nuclear deal, with the five permanent members of the UN Security Council and Germany.

The road to revolution

Reza Shah overthrew the Qajar Dynasty and founded the Pahlavi Dynasty in 1921.

Shah, who abolished oil agreements with the UK and had close relations with Germany during World War II, became the target of the USSR and the UK.

In 1963, Mohammad Reza faced stiff opposition when he attempted to implement reforms that he called the “White Revolution.”

Mobilizing Iranians with speeches, Khomeini was first imprisoned and then sentenced to death.

Surviving the death penalty, Khomeini was exiled and fled to Iraq in 1964, then to Turkey, and finally to France.

Opposition and mass protests against the Shah became widespread across the country.

The Shah’s police force, the SAVAK, opened fire on protesters on Jan. 9, 1978, killing 100 people. The military crackdown became a turning point on the road to revolution.

Khomeini returned on Feb. 1, and the 58-year-old Pahlavi Dynasty collapsed.

As a result of a referendum held on April 1, Iran officially became the Islamic Republic.