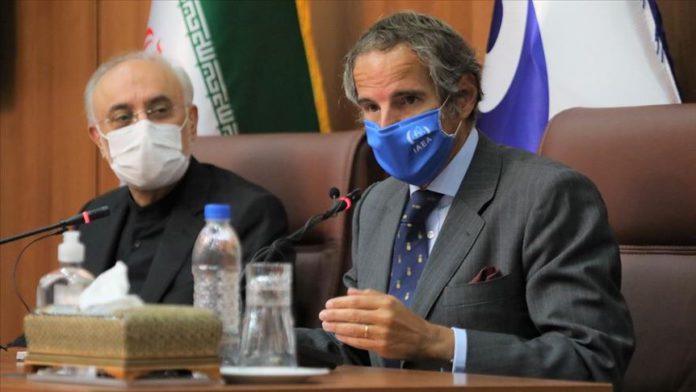 The director-general of the International Atomic Energy Agency (IAEA), Rafael Grossi, held wide-ranging talks with Iran’s nuclear chief Ali Akbar Salehi in Tehran on Tuesday and both agreed to open “a new chapter of cooperation”.

Grossi arrived in Tehran late on Monday on a two-day visit to discuss the issue of granting IAEA inspectors access to two Iranian nuclear sites.

He is expected to meet with top Iranian officials, including President Hassan Rouhani and Foreign Minister Javad Zarif, officials said.

The standoff between the UN nuclear watchdog and Tehran has intensified in recent months after the IAEA called on Iran to allow its inspectors inside the two nuclear sites in question.

On Tuesday morning, the IAEA delegation headed by Grossi held a roundtable discussion with officials of the Atomic Energy Organization of Iran (AEOI).

Following the meeting, both sides said a “new chapter of cooperation” between the IAEA and Iran will “begin” and “expand”.

Speaking at a press conference, Salehi termed the talks as “constructive” and said both parties agreed that the UN agency will carry out its work professionally and Iran will fulfill its obligations.

Grossi, who had visited Iran a few times before taking over as the IAEA chief in December last year, said he had “extensive discussions” with AEOI officials on various issues.

Defending the work of the UN nuclear watchdog, he said the IAEA operates on the basis of “legal instruments” and it has a “neutral approach” on Iran’s nuclear program.

“Our constructive cooperation exists and will continue,” he said, dismissing speculations that the IAEA’s approach has changed since Grossi took office.

Last month, Gossi warned that “things will be bad” for Iran if the IAEA inspectors are denied access to the nuclear sites, and said it was “absolute necessity for us to resolve the issue very soon”.

Iran has so far refused access to the two nuclear sites, maintaining that the IAEA has no legal basis to inspect them since the activities at the sites are from pre 2000s.

On Sunday, AEOI spokesperson Behrouz Kamalvandi said the IAEA wanted access to two nuclear sites, one in Tehran and the other near the central Isfahan province.

“We have never said we will not grant access to the agency, but this will happen if such claims end once and for all,” he said, referring to claims that Iran was hiding its nuclear activities.

On Monday, Iran’s Foreign Ministry said relations with IAEA have been marked by “ups and downs” but cooperation had been bolstered by the 2015 nuclear deal.

The deal is hanging by a thread in the wake of the US move to reinstate all the pre-2015 sanctions on Iran, including an arms embargo, which observers believe could kill the nuclear deal.

Iran’s envoy to the IAEA Kazzem Gharibabadi, however, said the IAEA chief’s visit to Tehran was not linked with US attempt to return all sanctions on Iran.

Interestingly, a day before Grossi’s scheduled visit to Tehran, Iran revealed that the July 2 fire incident at Natanz nuclear facility in Isfahan province was “an act of sabotage”.

In an interview with state TV, the AEOI spokesperson said the incident was caused by an explosion, without divulging more details.

Sirous Amerian, a security analyst, told Anadolu Agency that the announcement of the probe results and not responding to it militarily is a “political signaling” that Iran is “trying to be calm at the moment”.

Iran had earlier vowed retaliation if it was established that the incident was an act of sabotage.

According to sources, the issue of sabotage also figured in the discussions between the two sides on Tuesday. The nuclear activities of Saudi Arabia were also discussed, sources said.