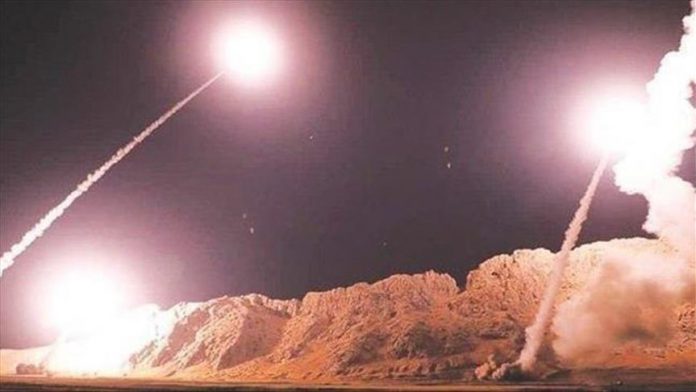 “We warn all allied countries of the U.S. that if attacks are launched from bases in their countries on Iran, they will be a target of military retaliation,” it added.

Iran’s Fars news agency called the firing of the missiles at Ain al-Asad airbase a “hard revenge” in a Twitter post.

The Pentagon confirmed that the attacks occurred at approximately 5:30 p.m. (EST) on Tuesday, with Iran launching more than a dozen ballistic missiles against U.S. military and coalition forces in Iraq.

“It is clear that these missiles were launched from Iran and targeted at least two Iraqi military bases hosting U.S. military and coalition personnel at Al-Asad and Irbil,” said Pentagon spokesman Jonathan Hoffman in a statement.

The Pentagon is working on initial battle damage assessments.

There are no reports of casualties so far.

The U.S. military confirmed that six missiles had made an impact.

White House Press Secretary Stephanie Grisham said: “We are aware of the reports of attacks on U.S. facilities in Iraq. The president has been briefed and is monitoring the situation closely and consulting with his national security team.”

His death marked a dramatic escalation in tensions between the U.S. and Iran, which have often been at a fever pitch since President Donald Trump chose in 2018 to unilaterally withdraw Washington from a 2015 nuclear pact world powers struck with Tehran.