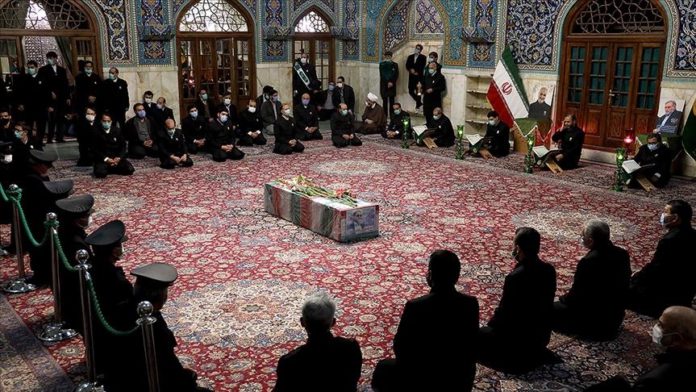 Calls for revenge over the killing of Iran’s top nuclear scientist are growing louder with a series of demonstrations held across the country, including in the capital.

The protesters in Tehran braving intense chill and heavy downpour turned up in front of the Parliament, the president’s office and the National Security Council to call for a strong response.

The calls have also come from top political and military officials, who have vowed “strong response” to the killing of Mohsen Fakhrizadeh.

On Sunday, Iran’s Parliament held a closed-door session to discuss the scientist’s killing and sought a detailed briefing from the intelligence minister.

The house approved a strategic action plan to reduce cooperation with the UN nuclear agency in response to the killing.

Fakhrizadeh, who headed the research and innovation division at Iran’s Defense Ministry, was assassinated by unidentified assailants on the outskirts of capital Tehran on Friday.

He is the fifth Iranian nuclear scientist to be killed since 2010. Like on previous occasions, Iran sees the hand of arch-enemy Israel behind the killing that has re-ignited tensions.

On Sunday, the parliament approved a double-urgency bill under which the voluntary implementation of Additional Protocol to the Non Proliferation Treaty (NPT) would be reconsidered and terms of cooperation with the International Atomic Energy Agency (IAEA) would change as well.

The move could also affect the future of the Iran nuclear deal signed between Tehran and the world powers in 2015. The US withdrew from the deal in 2018 but the incoming Biden administration has shown interest in returning to it.

Speaking on the sidelines of the session, Speaker Mohammad Baqer Qalibaf, making a case for retaliation, said the “enemy will not regret [the act] except with a strong reaction [from Iran]”.

He said the killing should be turned into an “opportunity” to become stronger in the security and nuclear fields and stressed that the government in Tehran must not “send weak signals”.

Qalibaf’s statement was directed at the Hassan Rouhani-led government that appears to see the option of ‘military retaliation’ as not viable at this juncture.

Earlier, Deputy Speaker Syed Amir Hossein Ghazizadeh also criticized the Foreign Ministry for its “weakness in consensus building” as “no European country or the US Democrats condemned the assassination [of the scientist]”, he tweeted.

President Rouhani is finding himself in a deep predicament, as pressure is building on his government for “strong response” to the scientist’s killing.

On Saturday, Rouhani accused Israel of murdering the country’s top nuclear scientist and said it was due to their “inability” to prevent Iran’s scientific progress.

He said the people of Iran are “wise” and will “not fall into the trap” laid by Israel, giving an indication that his government was not looking at immediate military retaliation.

Ali Rabie, the government spokesman, on Sunday said the terrorist act had “broader goals”, including disturbing the social order, creating confusion in Iran’s strategy and disrupting regional and global security.

He further said that Iran will respond to it but “not in the field defined by the enemy”.

In an oblique reference to the remarks by top parliamentarians, Rabie said the killing of Fakhrizadeh must “not be linked to negotiations” between the Rouhani government and the US.

While the Rouhani government appears to be showing ‘strategic patience’, remarks by many top military officials, parliamentarians and clergy echo the general sentiment of retaliation.

Gholamreza Mesbahi Moghadam, a member of top advisory body Expediency Council, on Sunday warned that Israel “should await harsh response” from Iran over the scientist’s killing.

His words were echoed by Brig. Gen. Ahmed Wahidi, who heads the Supreme National Defense University. He said Iran will “respond in a way and on the ground it defines”.

On Saturday, Iran’s Supreme Leader Ali Khamenei also called for investigations into the incident and action against the perpetrators.

Fakhrizade had been on the radar of Israeli spy agency for years and even survived a few assassination bids. In 2018, Israeli premier Benjamin Netanyahu had mentioned him during a presentation on Iran’s nuclear program.

Officials say the intelligence and security agencies have been able to find clues during preliminary investigations, which could lead them to those who planned the attack.

Meanwhile, Iran’s human rights council has urged the UN to “use all its mechanisms for cooperation with Iran’s judiciary to identify, sue and punish” those involved in the killing.

Fakhrizade will be buried in his hometown Qom on Monday in presence of senior political and military officials, reports said.