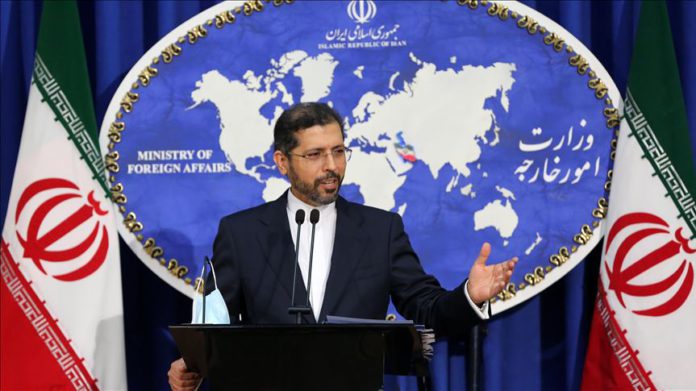 The Iranian Foreign Ministry on Monday called on Azerbaijan and Armenia to halt military escalations and abide by a ceasefire between the two countries.

“Iran calls on the two parties to exercise more self-restraint, condemns the missile attacks on the vital infrastructure, the residential areas of cities, and the killing of civilians,” ministry spokesman Saeed Khatibzadeh said in a statement.

Conveying condolences to the families of victims, Khatibzadeh called on the two sides to abide by the ceasefire, continue their negotiations in line with international law, adhere to the territorial integrity of each other, and “evacuation of the occupied cities”.

Khatibzadeh said that Iran was ready to help facilitate peace talks for achieving “permanent and sustainable peace and solution” in the region.

Following meetings in Moscow on Oct. 10, Azerbaijan and Armenia agreed on a humanitarian cease-fire so that conflicting sides could retrieve bodies left on the battlefield in Karabakh, also known as UpperNagorno-Karabakh, and hold prisoner exchange.

At least nine people including four women were killed and 34 others injured in the attack.

Between Sept. 27, when the clashes began, and October 11, as many as 41 Azerbaijani civilians have been killed and more than 200 injured.

Some 1,165 houses, 57 residential and commercial buildings, and 146 public buildings have also been destroyed or damaged, according to Azerbaijani officials.

The violence began on Sept. 27, when Armenian forces targeted civilian Azerbaijani settlements and military positions in the region, leading to casualties.

Relations between the two former Soviet republics have been tense since 1991 when the Armenian military occupied Nagorno Karabakh.