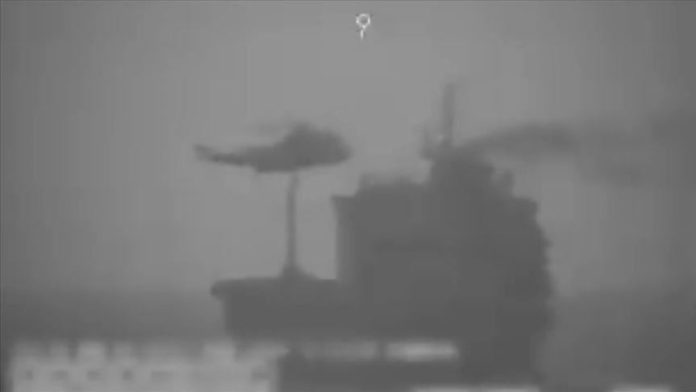 Iranian naval forces briefly seized and boarded a Liberian-flagged oil tanker near the Strait of Hormuz in the Persian Gulf on Wednesday, according to the US military.

The US Central Command (CENTCOM) released a black-and-white video on Thursday showing special forces getting down from a helicopter and boarding the ship named MV Wila.

“Today in international waters, Iranian forces, including two ships and an Iranian “Sea King” helicopter, overtook and boarded a ship called the ‘Wila’,” CENTCOM said in a statement.

The video was shot from a US warship some five kilometers (about three miles) away, according to American military journalist Howard Altman.

In a series of tweets, he quoted a Department of Defense source as saying that “Iranian forces … boarded the Wila for several hours before letting it on its way.”

The official said there was no distress signal from the ship and that the US “was not taking any action.”

The last position of the ship, according to tracking website Refinitiv, appeared to be off the UAE’s eastern coast, near the city of Khor Fakkan.

While there was no immediate reaction from Iranian authorities, a Telegram channel believed to be affiliated with Iran’s Islamic Revolutionary Guard Corps (IRGC) said its naval forces had captured a “spy ship” in the strategic Strait of Hormuz.

The incident comes less than a week after an Iranian oil tanker was seized by Pakistani authorities in the port of Karachi “at the request of the US,” according to the semi-official Fars News Agency.

The Iranian oil tanker was “monitored by an American organization” and they had asked Pakistani authorities to “seize it,” the agency quoted a Pakistani senator, Rehman Malik, as saying.

Iranian authorities, however, said they had not received any notification on the matter from Pakistan.

Tensions between Iran and the US have heightened as a series of incidents in the Persian Gulf region has put the two sides on a collision course.

Vessels belonging to the two countries have also been on the verge of confrontation on several recent occasions.

The US government has upped the ante by calling for the extension of a UN arms embargo on Iran, which is slated to expire in October this year.

Iran, while expressing confidence that the US resolution will be rejected by the UN Security Council, has warned of a “decisive reaction” if the embargo is extended.