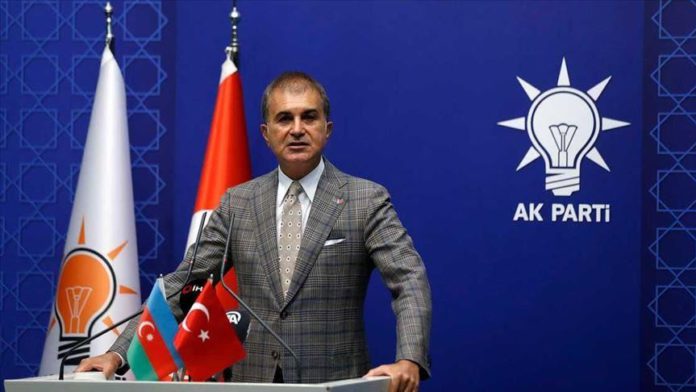 Armenia’s attack on Azerbaijani civilian settlements is a “blatant” violation of international law, and the international community should condemn Armenia, said Turkey’s ruling party on Tuesday.

“Turkey will continue to support our Azerbaijani brothers in whatever way they want,” said Omer Celik, spokesman for the Justice and Development (AK) Party.

Celik stressed that Azerbaijan has the right to defend its territory, adding that the Upper Karabakh region is the territory of Azerbaijan and Armenia is the occupying force there.

“Azerbaijan and Turkey are the two countries which have the same fate, same future and same values,” he said.

He underlined that the conflict will be resolved as soon as Armenia leaves the occupied territories, and said an advice from anyone that Azerbaijan should exercise restraint after the Armenian attacks is “unacceptable.”

“The Armenian side is in panic. It turns out that they have mercenaries fighting in their ranks and have close links with PKK [terror] members.”

Celik said that Armenian Prime Minister Nikol Pashinyan is aiming to cover up the issue by claiming that Turkey has sent “jihadist groups” to fight.

“But, it is Armenia that brought foreign elements there,” he added.

The fact that US State Secretary Mike Pompeo visited only the Greek Cypriot Administration without paying a visit to the Turkish Cyprus, or went to Greece twice in a month and made one-sided support statements do not serve the peace of the region, Celik said.

He said that this was an approach that overshadowed the neutrality of the US on these matters.

Celik recalled that Turkey had repeatedly expressed its openness to the multifaceted diplomacy, and held discussions with several leaders of the EU countries and international organizations to explain its position on the issue.

Tensions have recently escalated over the energy exploration in the Eastern Mediterranean.

Greece, Greek Cypriot administration and other EU members have tried to block Turkey’s energy exploration, claiming it is searching in Greek waters, using a maximalist view of Athens’ maritime territory based on small islands near the Turkish coast.

Turkey – the country with the longest coastline on the Mediterranean – says this view is illegal and makes no sense and has sent out drill ships, with military escort, to explore for energy on its continental shelf, saying that both Turkey and the Turkish Republic of Northern Cyprus have rights in the region.

Ankara has repeatedly urged negotiations with no preconditions to lay out fair sharing of the region’s resources.

US: Officer in George Floyd’s death will not testify

At least 3 journalists killed by Myanmar junta since December: Report