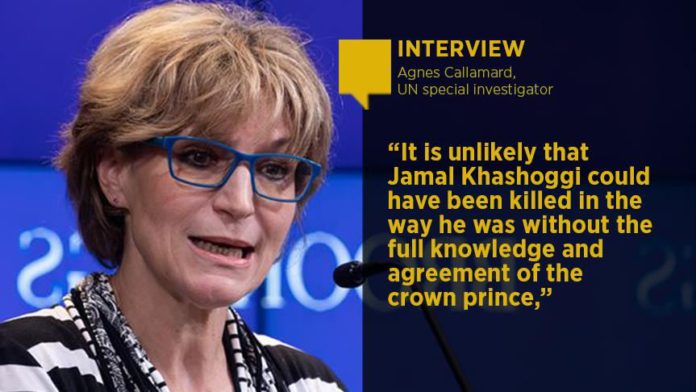 In an interview with Anadolu Agency, she said that circumstantial evidence points to Saudi Crown Prince Mohammed bin Salman having full knowledge and giving approval to Khashoggi’s murder.

Callamard, the UN special rapporteur on extrajudicial, summary, or arbitrary execution, was speaking on the second anniversary of the US-based journalist’s killing at the Saudi Consulate in Istanbul, Turkey.

“It is unlikely that Jamal Khashoggi could have been killed in the way he was without the full knowledge and agreement of the crown prince,” said Callamard.

“And the fact that some of his closest advisors were involved in the pre-planning phase – all of those facts will tend to show circumstantially that his responsibilities involve, including in terms of ordering the killing,” said the UN investigator, a longtime human rights expert.

She said that “factually, materially, personally,” she could not find evidence linking Khashoggi’s killing directly to the crown prince.

“This is why the work done by the American intelligence services, the information they gathered through their intelligence work is important.

“And this is why we need to keep asking for the public release of the CIA assessment of the responsibility of Mohammed bin Salman,” said Callamard.

US President Donald Trump has been an outlier among Western leaders in denying or downplaying Mohammed bin Salman’s involvement in the murder.

‘Cannot be hostages to Saudi justice’

Callamard said that in her view, other nations in the international community might not have been as forceful as her team would have liked in condemning the state of Saudi Arabia’s responsibility and its unwillingness to bring those responsible to account.

“I don’t expect much from Saudi Arabia. And unfortunately, I did not expect much, when a year and a half ago, I started the investigation,” she said.

“I’ve always said, we cannot be held hostage to the Saudi judicial system. We know how imperfect it is.”

Her team knows how subservient the Saudi judicial system is to political interference, she explained.

“And unfortunately, the [Saudi] trial that has taken place from January 2019 to September 2020 has reinforced our suspicions,” she said.

The Saudi trial was widely criticized for skirting the issue of Mohammed bin Salman’s involvement in the killing.

Under the current state of affairs, there is little hope that the state of Arabia will do a proper prosecution, she said.

“So we need to look elsewhere for justice. It’s not going to be in a [Saudi] court of law,” said Callamard.

Callamard voiced support for the boycott of some major world cities of Saudi Arabia’s G20 presidency, with the mayors of New York, Los Angeles, Paris, and London refusing to attend an international summit hosted this week by the Saudis.

On Oct. 2, 2018, the 59-year-old columnist for The Washington Post was killed and dismembered by Saudi operatives shortly after entering the country’s consulate in Istanbul, Turkey.

Riyadh offered conflicting narratives to explain his disappearance before at length acknowledging he was murdered in the diplomatic building in a “rogue operation.”

This Sept. 8, the Riyadh Criminal Court commuted death sentences and handed down prison terms of up to 20 years to the accused, who were pardoned by the journalist’s family. Last year they had been sentenced to death.

But Callamard praised Turkey’s efforts, saying: “I’m glad that Turkey is moving forward with a trial. I’m glad that they’ve done their first indictment in July.”

She added: “And now the second indictment in September, I think it is important for the sake of the integrity of the investigation in Turkey.”

Turkey in talks with Russia to hand over 18 regime elements