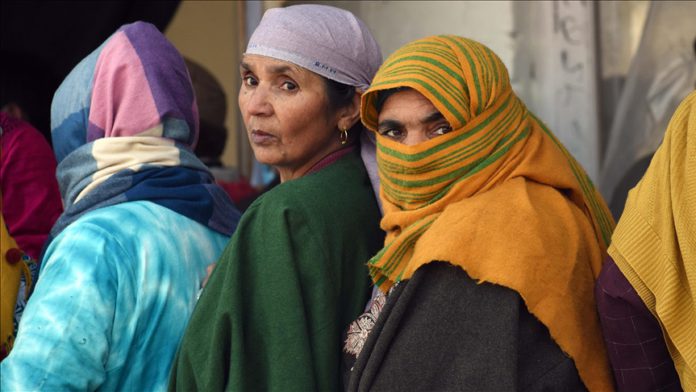 On International Women’s Day, a Kashmiri human rights defender asked international community to notice Kashmiri women who “have been carrying the heaviest burden” in the ongoing three-decades-long conflict.

In a letter addressed to the UN Security Council, the International Court of Justice, UN Commission on Human Rights and the EU, Ahsan Untoo, chairman of the International Forum for Justice Human Rights JK, exemplified the plight of Kashmiri women through the stories of four women whose sons or husbands have either been killed or jailed.

Untoo said Rafiqa Begum, wife of jailed pro-freedom leader Ayaz Akbar, has been suffering from stage four cancer. At her home in Maloora, in the outskirts of Srinagar, Rafiqa told Untoo:

“I can die any time. I want to see my husband before that. We have seen a lot of hardships. My daughter got divorced. My sons are struggling for livelihood. My husband was jailed on fake charges by India’s National Investigation Agency (NIA) for his political beliefs. I often see (Indian prime minister Narendra) Modi posting pictures of his meeting with his mother. Can’t my husband see what is happening to his family?”

While Rafiqa pines for a meeting with her husband, Rafia Begum, a resident of the restive Pulwama district, has asked the Indian government to return the body of her son, Athar Wani, who the Indian forces claim was a militant killed in a gunfight last December in Srinagar along with two other youngsters from southern Kashmir. The families of the deceased have said the three were killed in a staged gunfight, and they had no links with militants.

“The pain of losing a son is unbearable. I do not want to live anymore. They also snatched his body. Let them return his body at least. He was innocent,” Untoo has quoted Rafia in his letter to the world bodies.

Maroofa Mehraj Kalwal, a mother of four children, has told Untoo that she slipped into depression after the arrest of her husband Mehraj-ud-din Kalwal, a pro-freedom leader, in July 2017. Kalwal has been jailed at Tihar Jail in the Indian capital on trumped-up charges, Maroofa told Untoo.

“My four daughters (aged 7-21) are depressed. They want to see their father. Our relatives have been helping us in these tough times, but this can’t go on forever. When he was free, we always feared he would be arrested. Now, when he is in jail, we fear for his life,” Maroofa told Untoo.

Akhtara Begum was in a state of shock for long after the arrest of her husband, Bashir Ahmad Bhat, a pro-freedom leader, in July 2017. Bhat is also lodged at Tihar Jail. Before his arrest, Bhat alias Peer Saifullah had been operated upon for a brain tumor.

Incarceration in jails outside of Jammu and Kashmir has made it difficult—and costly—for the families to meet their imprisoned kin.

Akhtara’s teenaged son Faisal told Untoo that his mother barely steps out of the home and talks less.

“She is in a shock. She used to do things when her father was around. Now she is lost. Our family has been ruined. This is a political vendetta against my father. The NIA is yet to produce the charge sheet because they have nothing concrete against him. We demand justice. The world should intervene,” Faisal said.

Untoo told Anadolu Agency that the world has largely been callous towards the suffering of Kashmiri women.

“Kashmiri women have been raped, killed and jailed. They also carry the burden of their men who have been killed, maimed, jailed or subjected to enforced custodial disappearance. Their suffering is not accidental but a result of a policy of suppressing the voices of freedom,” Untoo said.

Kashmir is held by India and Pakistan in parts and claimed both in full. China also holds a small sliver of Kashmir.