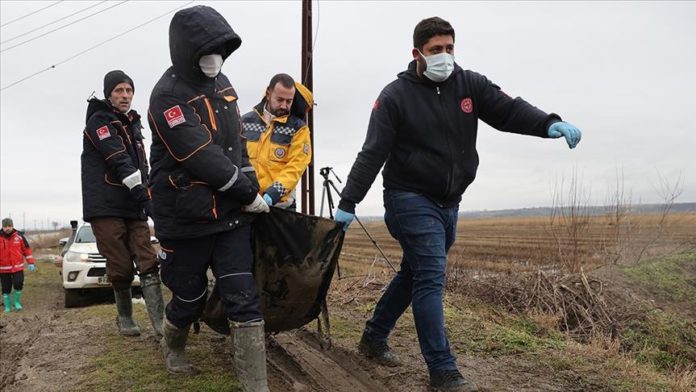 Although the international community did not remain indifferent to the death of 19 irregular migrants, who were pushed back into Turkish territory by Greek border units, Greece was not directly referred to as the responsible party.

Liz Throssell, the spokeswoman for the Office of the United Nations High Commissioner for Human Rights (OHCR), said the reports on the death of migrants were truly saddening and the case should immediately be investigated.

Throssell also said that the UN Human Rights office has repeatedly stressed that states had the right to exercise jurisdiction at their international borders but this should be in line with human rights obligations.

UN Refugee Agency spokeswoman Shabia Mantoo described the freezing to death of irregular migrants as “heart-breaking” in a statement to Anadolu Agency.

“We are shocked and deeply saddened by the news,” said Mantoo.

“We call for an urgent investigation. We reiterate our call to ensure that the lives, rights, safety, and well-being of refugees and migrants are protected and put first,” she said.

International Organization for Migration (IOM) spokeswoman Safa Msehli said she was “horrified” by the news of the reported deaths of irregular migrants.

The German Foreign Ministry said in a statement that the government was concerned over the reports of deaths on the Greek-Turkish border, adding: “It’s important to find out the actual circumstances of this incident.”

It also said: “Any type of border protection measure must meet the humanitarian standards under all circumstances, and should comply with the provisions of European and international law.”

Anitta Hipper, a spokesperson for the European Commission, said they “deeply regretted” the loss of lives.

“Any such treatment, if confirmed to be true, would be intolerable,” she said, adding the EU Commissioner for Home Affairs Ylva Johansson was “in close contact with the Greek minister” on the issue.

Asked what the “close contact” meant, she said Johansson spoke to Greek Migration and Asylum Minister Notis Mitarakis at an informal gathering of the EU justice and home affairs ministers in France and discussed the matter although the latter had limited information on the matter and said the irregular migrants were not moving toward the Greek border.

According to Hipper, Johansson said the EU should protect the borders and prevent irregular arrivals, however, this should be done in line with the European values and the right to asylum should be protected.

Mitarakis, for his part, said Turkish authorities’ statements on the tragic event that occurred while they were trying to cross the European borders were unacceptable and it was Turkiye’s responsibility to prevent illegal crossings.

The Greek minister said Turkish authorities’ statements were unfounded claims and alleged that the irregular migrants “never made it as far as the (Greek) border.”

The lifeless bodies of a total of 11 irregular migrants were found in northwestern Turkiye’s Edirne province, which borders Greece, on Wednesday. Another perished later at a hospital.

Turkish Interior Minister Suleyman Soylu said the irregular migrants were stripped of their clothes and shoes by Greek border units who then pushed them back to the Turkish territory.

The next day, seven other irregular migrants were found dead in the same region, raising the death toll to 19.