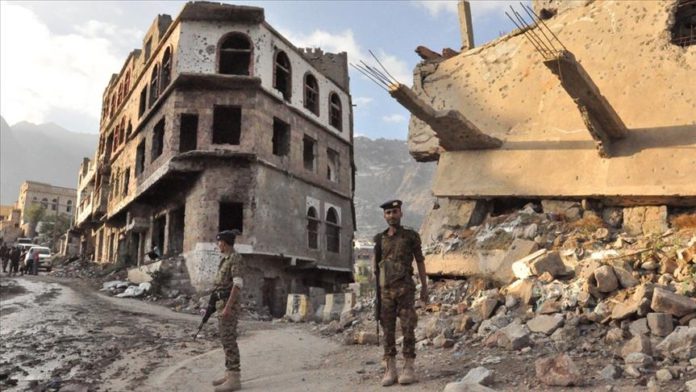 Iran, the United Arab Emirates and Saudi Arabia should pull out from war-torn Yemen where 24 million people, half of whom are children need urgent aid, experts said.

On March 2011, popular uprising erupted in Yemen against Ali Abdullah Salih who ruled the country for over 20 years.

Salih was forced to resign in 2012 and he fled to Saudi Arabia. Vice President Abdrabbuh Mansur Hadi was elected in its aftermath.

The Hadi government could not stand the conflict in the country and was forced to resign in 2014 after the Houthi rebel group overran the capital, Sanaa.

Yemen entered a spiral of violence as the Houthis dissolved the parliament on Feb. 6, 2015 and increased their dominance in the country.

Hadi went to Saudi Arabia before returning with the support of the Saudis and declared Aden the temporary capital.

The conflict escalated as Saudi Arabia led an international coalition to support the Yemeni legitimate government.

While the coalition forces — currently fighting the Houthis under the leadership of Saudi Arabia — support the legitimate government of Hadi, the UAE which is a member state of the coalition supports the separatist Southern Transition Council (STC).

The STC meanwhile vies for power in southern Yemen against the government.

Noting that the UAE officially declared war against members of the Islamic Islah Party, Saudi Arabia, on the other hand, was reluctant to firmly support the national army and popular resistance and did not allow the national army to fight decisively against Houthi militias, Ghanem said.

Stating that UAE and Saudi Arabia’s airstrikes against the Houthis mostly target civilians and infrastructure in Yemen, Ghanem said: “The Houthi militias started a proxy war in favor of Iran. They stopped paying salaries to public employees by seizing all public funds in the areas under their control. The Houthis caused the spread of poverty while destroyed the vast social sectors in Yemen and seized many real estates.”

Ghanem emphasized that the Houthi militias have recruited tens of thousands of young people, including children and committed a crime against humanity, while the international community is watching the violence in silence.

Stating that Iran continues its show of power by bombing the vital economic centers and oil facilities with rockets and drones through the Houthi militias, Ghanem said: “Saudi Arabia cannot protect its vital and strategic infrastructures related to oil production and exports. It seeks help and support from the UK and the US. “

Ghanem stated that in the last eight years, tens of thousands of people were killed due to the turmoil in the country, and that terrible economic conditions brought Yemen to the brink of famine.

Ghanem argued that the Yemeni crisis could have ended if the national army was sufficiently supported.

“No one can guarantee peace and stability in Yemen if Iran and the Houthi militias declare that they have won the war,” said Ghanem.

“The Houthi militias will continue the war until they occupy the southern and central regions. Even if Saudi Arabia and the Houthis made an agreement to end the war, it will be because the Houthis’ strategic goals include seizing Mecca and Medina.”

He pointed out the majority of the Yemeni people only accepts victory of the national army against STC and Houthis.

“Or the international community [US, UK, Europe, China, Russia and Turkey] can sincerely end the war by preparing a roadmap with Yemen’s legitimate government,” he said.

Ghanem added that based on the new roadmap Iran, UAE and Saudi Arabia should first pullout from Yemen and pay compensation to the Yemenis. “Both the Houthi militias and the STC militias should immediately hand over their heavy weapons to the national army.”

For her part, Giray Saynur Derman, an academic at Marmara University’s Communication Faculty, said that the devastating war that has been going on for years in Yemen has brought the greatest human disaster of the century.

Citing that the UN labeled the Yemeni crisis “the biggest humanitarian disaster in the world”, Derman said, “the state of the country has turned into a drama in nutshell. As a result of hunger, famine, cholera, conflicts and airstrikes, thousands of people, mostly children, died. The diseases are spreading rapidly, especially cholera.”

Stating that the full blockade implemented by the coalition prevented the delivery of aid to Yemen, Derman said that this situation seriously triggered the economic crisis while state institutions lack financial resources.

Derman stated that at least 112,000 people have died in the conflicts in Yemen and that more than 3.6 million people have been forced to migrate, saying: “Yemen is the place where 24 million of the [total] population of 28 million — 12 million of them are children — need help to survive forming the world’s biggest humanitarian crisis.”

Noting that the situation in Yemen started to worsen with the novel coronavirus, Derman said: “Yemen is facing an emergency. Sanitation and clean water are insufficient. Only half of the healthcare facilities are working and there are no basic equipment such as masks and gloves, let alone oxygen and other essential supplies to treat the coronavirus. Many health care workers do not receive salaries or incentives. According to a report published in October the number of acute malnutrition among children under the age of five is more than half a million in the southern regions.”

Derman stated that if the famine continues, two million pregnant and breastfeeding women are at risk of starvation, and 1.1 million of these women are currently malnourished.

Stating that millions of children are at risk of death, Derman said: “While children are being killed and disabled in the conflict, the damage and closure of schools and hospitals disrupted access to education and health services, leaving children more vulnerable.”

Stating that millions of dollars collected by donor states at international conferences held in 2017 and 2018 did not reach Yemen due to the blockade, Derman said: “The UN, UNICEF and many international aid organizations are unfortunately unable to deliver this aid due to difficulties and blockade.”