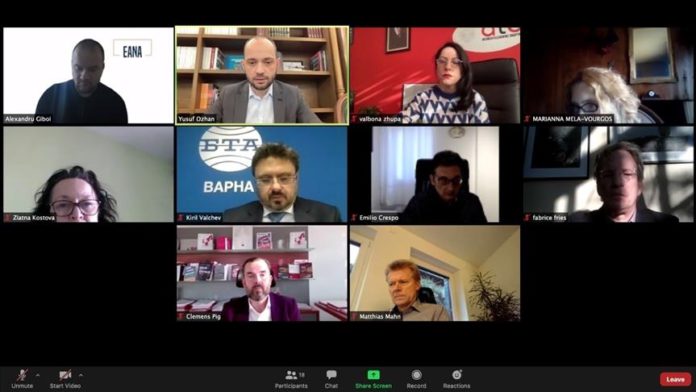 Climate change stands as one of the most serious global threats faced by the humanity and it is crucial to realize the interaction between news organizations as it would contribute significantly to combat the threat, said Anadolu

Ozhan’s remarks came at a virtual seminar, EANA Xchange, organized by the European Alliance of News Agencies (EANA). He gave a presentation, titled Climate and Agency Journalism, and commented on the crucial role media organizations play with regards to the environmental journalism.

“Climate change is arguably one of the most serious global threats the humanity is facing and we should limit the increase in the average temperature of the globe with 1.5 degrees Celsius to avoid catastrophic consequences,” he said.

The climate change affects lives all around the world and human beings across the globe have been affected indiscriminately, he said, adding no country could turn a blind eye to the issue.

While disasters stemming from climate change such as massive fires worldwide, loss of biodiversity and extinctions of species stand as some of the observed troubles, the UN reports estimated that the water shortage would pose a threat to one of every four people in the near future as well as the air pollution, he said.

“We are under attack in all directions by varying degrees but none are exempt from the effects of climate change,” he warned.

Citing a study which indicated that about 50% of people get environment-related news from TV channels and other broadcasting bodies, he said: “The public is getting news and half of public are getting educated from our outputs, so we stand on a very critical place and considering the importance of our role as news agencies in shaping the content, it is crucial to realize the interaction between us.”

“It is vital for us to see our environment and climate news play a determining role in the solutions to problems,” he said.

As Anadolu Agency is having a “deep sensitivity” to the climate change and environmental changes, it is going to establish an environment editorial unit, according to Ozhan, who said the output would be served free of charge to the subscribers as the organization viewed it as a “public duty.”

“The climate crisis is something that we believe we have to make accessible as much as we can and the outputs of the environment desk will be on website, it will be at arms-length for everyone who are interested in,” he said.

Furthermore, Anadolu Agency is preparing to hold Environment Forum in 2022 to raise global awareness on issues related to the environment and climate change where professionals and journalists will come together to discuss the issue of climate change, Ozhan added.

EANA Xchange is an online platform for EANA members aimed at constant information sharing as part of rapid digital transformation. The platform is going to hold a series of monthly video seminars in 2022.

Each session will focus on a special topic chosen by a member news agency and a presentation will be given on that topic. The participants will have the opportunity to exchange views.