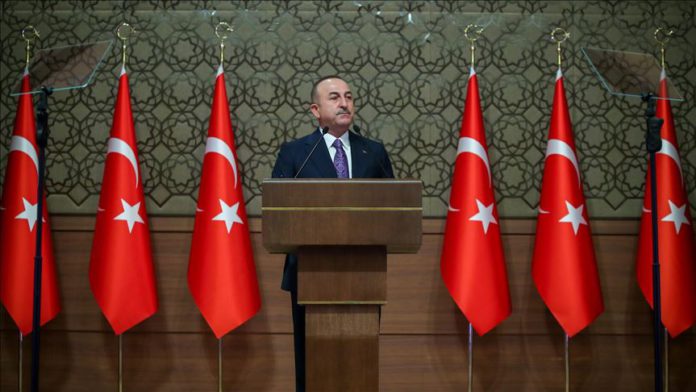 The Turkish foreign minister said Tuesday no plan excluding Turkey in the Eastern Mediterranean has a chance to succeed, and reiterated the country’s determination on defending its rights and interests in the region.

“No one should expect Turkey to abandon its right to the resources [in the Eastern Mediterranean], and initiatives [in the region] excluding Turkey have no chance of success,” Mevlut Cavusoglu told the 12th Ambassadors’ Conference in the capital Ankara.

Turkey is a guarantor nation for the Turkish Republic of Northern Cyprus (TRNC) and has consistently contested the Greek Cypriot administration’s unilateral drilling activities in the Eastern Mediterranean, asserting that the TRNC also has rights to the resources in the area.

In 1974, following a coup aimed at the annexation of Cyprus by Greece and amid ethnic violence against the Turkish Cypriots, Ankara had to intervene as a guarantor power. In 1983, the TRNC was founded.

The decades since have seen several attempts to resolve the Cyprus dispute, all ending in failure. The latest, held with the participation of the guarantor countries — Turkey, Greece, and the UK — came to an end without any progress in 2017 in Switzerland.

“Turkey and the EU have a common interest on ending conflicts in their region,” Cavusoglu said, adding that the two sides are neighboring to regions which could not find a balance for 100 years.

Reiterating strong ties between Turkey and Azerbaijan in line with the “one nation under two states” principle, Cavusoglu stressed that Turkey not only stands by Azerbaijan due to brotherhood ties, but also due to the righteousness of Azerbaijan under international law.

Russian President Vladimir Putin had earlier announced that Azerbaijan and Armenia signed an agreement to create the necessary conditions for a long-term and comprehensive solution to the longstanding conflict over Nagorno-Karabakh, also known as Upper Karabakh.

The announcement brought scenes of enthusiastic celebrations in many Azerbaijani cities, with thousands carrying both Azerbaijani and Turkish flags, singing national anthems, and dancing in the streets.

Relations between the two former Soviet republics over Upper Karabakh have remained tense since 1991, but fresh clashes broke out on Sept. 27. Since then, Armenia has repeatedly attacked Azerbaijani civilians and forces, even violating three humanitarian cease-fire agreements.

Turkey will continue to defend the culture of tolerance and coexistence, the Turkish top diplomat stressed, adding that the Foreign Ministry will run annual reports on issues, including hostility to Islam, anti-immigration, and xenophobia.