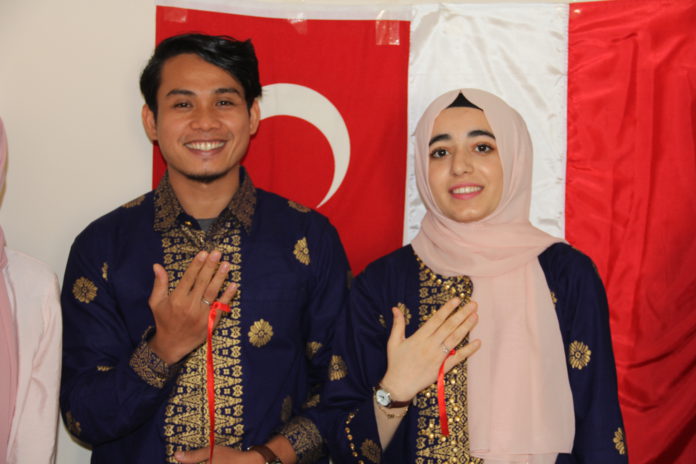 An Indonesian man and a Turkish woman who met two years ago in Indonesia hosted their engagement ceremony via videoconference that was attended by families in the two countries.

Edanur Yildiz, 22, who lives in Inegol of northwestern Bursa province of Turkey went to Indonesia in 2019 as part of an exchange program.

There she met Muhammad Mutawalli Asshidiqiy, 27, who managed a cafe in Jambi province.

As their friendship grew, Yildiz returned to Turkey but the two kept in touch through social media.

In time, their friendship turned to love and the couple decided to get married.

Upon the approval of his family, the young Indonesian went to Inegol for the engagement. Due to the high cost of flights, Asshidiqiy’s family was not able to attend the ceremony in person.

Instead, they held the traditional ceremony of asking the girl’s hand in marriage through videoconference, where the prospective groom’s family seeks approval from the bride’s family.

This was followed by an engagement ceremony and the couple declared their engagement on social media with a graphic.

Yildiz, who continues her university studies, told Anadolu Agency that she was warmly welcomed by Indonesians during her two-week stay in the country.

She said she did not have difficulty, as Indonesian students could speak Turkish.

“There, I met Mutawalli. Mutawalli did not know Turkish, because he wasn’t a student in Turkey,” said Yildiz. “At first, we were only friends, then our relationship grew and when it became a serious level, we decided to get engaged.”

She said her family had hesitations regarding their relationships in the beginning. While her mother did not find the relationship odd, her father thought differently, but he was later convinced to support the couple.

Yildiz said they have not decided which country they will host the wedding ceremony.

Asshidiqiy said he learned Turkish and Ottoman history during his education and he loves Turkey and its people.

“When I asked people, ‘Which exit should I take?,’ they helped me very much. I was very pleased that they tried to help me,” he said.

Noting that he loved Turkey even more when he saw Istanbul and Bursa, Asshidiqiy said “I love Turkey because it is a Muslim country, and its president Recep Tayyip Erdogan helps Muslim countries.”

He said his family, too, had second thoughts about the couple’s relationship, but as they often held videoconferences with Yildiz and her family, their concerns were relieved.

Majority of Olympic village residents in Japan to be vaccinated