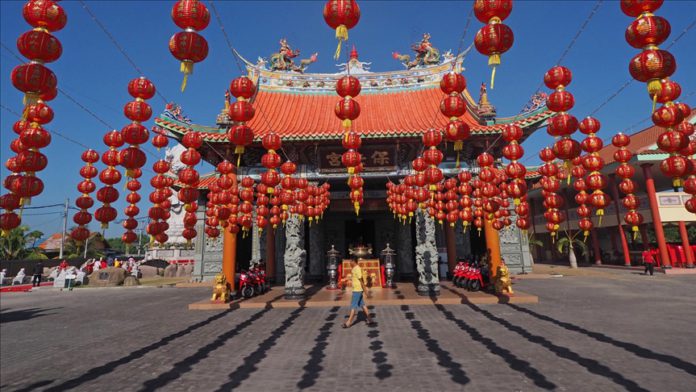 Indonesians of Chinese descent will celebrate the Lunar New Year starting Friday under strict coronavirus measures in a country still struggling against the pandemic.

Ruby Santamoko, secretary of the temple’s management, said only 10% of the 7,000 regular worshippers are expected to attend this year’s prayers.

He urged people to pray at home and avoid mass gatherings during the holiday.

“People who come to the temple will have to follow strict health protocols. We will only groups of 30 at the central altar,” he told Anadolu Agency.

“We hope the elderly and children heed our advice and stay home this year,” he said.

Among the traditions cut out this year are the lion dance and shadow puppet performances, he added, as well as the mass candle lightings and the food banquet after prayers.

However, Santamoko stressed that the restrictions should not take away from the importance of the Lunar New Year celebrations.

He pointed out that refraining from gatherings or family visits was in line with the spirit of protecting loved ones.

“We would never want our family members to get this virus, which can prove fatal, just because of these celebrations,” he said.

Health experts in Indonesia have said that restrained Lunar New Year festivities could prove critical in the country’s fight against COVID-19.

More people celebrating at home will reduce the risk of a spike in infections, which can usually occur after such a holiday, said Ede Surya Darmawan, chairman of the Association of Indonesian Public Health Experts.

Indonesia saw a surge in cases after previous holidays such as the Muslim Eid festivals, Independence Day, Christmas, and New Year breaks.

“Let’s be a wise and intelligent society which learns from the past and dare to call for people to stay at home while celebrating the Chinese New Year this year, so there will be no spike in cases,” Darmawan said in a statement.

As part of measures to curb movement within the country during the holiday, the government has barred civil servants, as well as military and police personnel, from traveling outside their current city of residence.