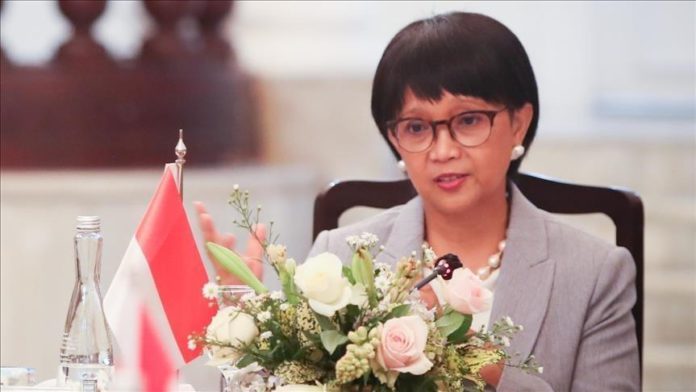 Indonesia on Wednesday urged all member states of the Non-Aligned Movement (NAM) to recognize the state of Palestine.

Palestine is the only country that attended the 1955 Asia-Africa Conference in Indonesia – a landmark gathering of mostly newly independent states – that in the over 60 years since still has yet to attain its independence, said Foreign Minister Retno Marsudi.

“All the NAM members must recognize the state of Palestine, support the relaunching of credible multilateral negotiation and ensure humanitarian access to alleviate the suffering of Palestinians,” she told the Mid-Term Ministerial Conference of the NAM, hosted remotely by the movement’s current chair Azerbaijan.

Marsudi also addressed the global COVID-19 vaccination gap, saying that while most developed countries have administered vaccines to 70% of their population, some movement countries remain below 10%.

The movement’s utmost priority is to reduce inequality and accelerate vaccinations in developing countries, she said.

“Therefore, the NAM can strengthen their support for the COVAX facility, especially for (its) dose-sharing mechanism,” she added, referring to a program to get vaccines in the hands of developing nations.

Marsudi also called on the movement’s members to work together to enhance global partnerships as one of the steps for post-pandemic economic recovery.

“Indonesia is set to chair the G20 summit next year, and we will push this chance to advance the interests of developing countries,” she said.

The virtual conference also adopted a political declaration that confirmed the movement’s stance on various global issues and appointed Russia as an observer country to the movement.