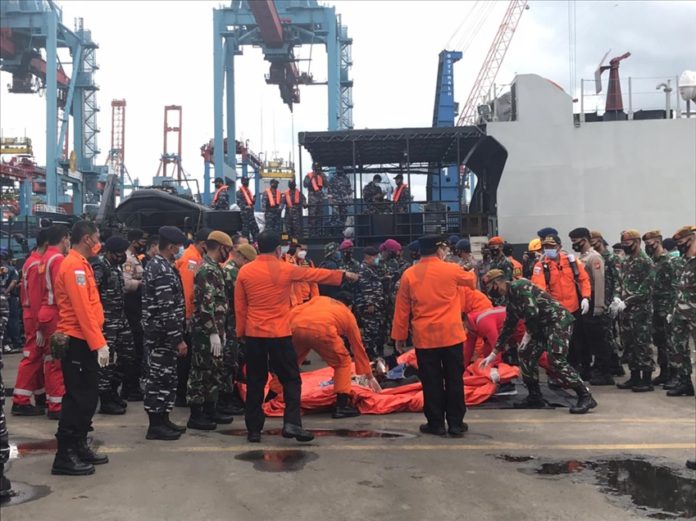 Suspected black box signals from a passenger plane which went down in Indonesian waters with 62 people on board Saturday have been found, according to the country’s military chief.

JAKARTA, INDONESIA – JANUARY 10: Search and rescue (SAR) officers unloaded fragments of tires, plane fragments, and children’s shorts which allegedly belonged to the victim Sriwijaya Air SJ 182 from KRI Kurau at Jakarta International Container Terminal (JICT) 2, Jakarta on Sunday, January 10, 2021. The fragments were obtained from search for the aircraft in the waters of the Thousand Islands. An Indonesian passenger aircraft with 62 people on board crashed into the sea after taking off from the capital Jakarta, authorities said Saturday. The plane carries 50 passengers on board, including 10 children, plus 12 crew members. ( Nicky Aulia Widadio – Anadolu Agency )

Signals from two objects believed to be black boxes from the Sriwijaya Air flight are being monitored by the KRI Rigel warship, which is taking part in search efforts, Marshal Hadi Tjahjono told reporters in the capital Jakarta on Sunday.

“Hopefully in the near future we will reach it so that we can find the cause of the accident,” he added.

Earlier on Sunday the Boeing 737-500 crash site was found, along with human remains, belongings, and life vests in the Thousand Islands area between the isles of Lancang and Laki.

“Divers reported that underwater visibility is clear and it is likely that more parts from the wreckage and even from the victims could be found,” Tjahjanto said.

Indonesian President Joko Widodo is reportedly closely monitoring the search and rescue operations and pressing officials to get results.

The domestic flight departed from Jakarta’s Soekarno-Hatta Airport bound for the city of Pontianak in West Borneo when it lost contact within minutes after taking off. It carried 50 passengers, including 10 children, and 12 crew members.