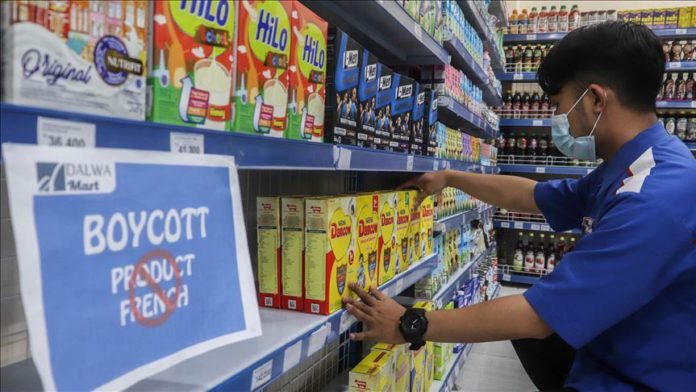 Several convenience stores in Indonesia have joined a boycott against French products in protest of anti-Islamic measures and rhetoric by France.

In East Java and West Kalimantan provinces, Basmalah, a community-owned convenience store chain based in the city of Pasuruan city, removed French products from its 180 outlets to store in warehouses.

Speaking to Anadolu Agency, Ahmad Edy Amin, a deputy managing director of the chain, said the French products that were being removed included formula milk, biscuits and cosmetics.

“Our shop was established and raised by the Islamic boarding school community. We, as scholars, want to be good and true Muslims. There is no grey area,” said Amin, adding that customers supported their move as most of them also condemned recent remarks by French President Emmanuel Macron.

Claiming Islam is a “religion in crisis,” he defended blasphemous cartoons of the Prophet Muhammad, leading to international condemnations, protests, and calls to boycott French-made products.

Despite financial loss, Amin said management was still determined to continue boycotting French goods to show solidarity with other Muslims in the world.

Another chain, 212 Sharia Cooperative in Makassar city of South Sulawesi province, has also joined the campaign against French products.

Muhammad Hidayat Hanis, chairman of the store, said the boycotted products, including bottled water and cosmetics, were covered with plastic wrap and a sign that read: “Boycott French Products. These items are not for sale.”

“We replaced them with local products made by SMEs,” Hanis told Anadolu Agency, adding that all four stores in the city also put up announcements of the boycott at their entrances.

“In matters of faith, we cannot bargain. I also participated in a demonstration denouncing Macron,” he added.

Also joining the campaign, Indragiri Mart, a supermarket located in Indragiri Hulu Regency of western Riau province, put up signs on the shelves marking French products, saying they were not for sale.

“We’re following the Indonesian Ulema Council, which called for boycott. I, myself, feel that there is a need for real action to counter Macron’s statement,” Imron Rosyadi, the store’s supervisor, told Anadolu Agency.

Imron said there were no complaints from customers regarding the move, adding that they understand the purpose of the action and chose to buy alternative products.

He added that the store would continue the campaign until the French president offered an apology to all Muslims around the world.