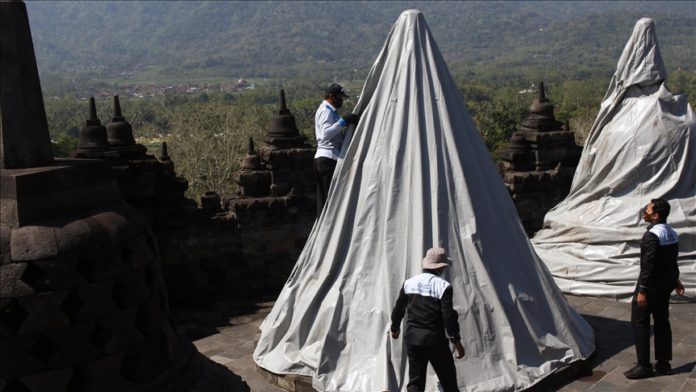 Dozens of stupas circling the Borobudur Temple, a 9th-century Buddhist temple, in the Indonesian Magelang city of the Central Java province, were covered in gray tarpaulins, to protect them from the raging Merapi volcano’s ashes.

“If volcanic ashes get in, it will be difficult for us to clean it since we have to dismantle the stupas,” Associate Cultural Officer of Borobudur Conservation Center Yudi Suhartono told Anadolu Agency on Tuesday.

Merapi volcano is located between the Central Java and Yogyakarta provinces, only 25 kilometers (15.5 miles) from Borobudur.

In recent weeks, one of the most active volcanoes in Indonesia has spewed volcanic ashes several times. Even in March, the eruption column reached 6,000 meters (19,685 feet).

Since November, the Geological Disaster Technology Research and Development Center has risen the status of the volcano from Level 2 to 3.

Suhartono said the volcanic ash of the volcano has a pH of 3 to 4, which means it has high acid levels which can cause weathering of the stupas.

“Therefore, the conservation office did not want to take risks that would diminish the originality of the UNESCO’s world cultural heritage,” he said. “We don’t want the stupas to be damaged.”

Suhartono said tarpaulin was chosen because it is thick and able to restrain the heat of volcanic ash.

Borobudur Temple has 72 Buddha statues, each seated inside a perforated stupa, on the top three floors surrounding the central dome.

Stupa is a Buddhist commemorative monument usually housing sacred relics associated with the Buddha or other saintly persons.

The conservation office also closed the floor of the temple with tarpaulin as it is feared that the ash from the Merapi eruption will enter the drainage.

“If the ashes get on the temple floor, we have to dismantle it and it will be so hard,” said Suhartono.

He noted that the office learned the lesson from the Merapi’s great eruption in 2010, when 70,000 cubic meters of volcanic ash covered the temple.

“Learning from the incident, we start to anticipate it,” he added.

The conservation office has also struggled to protect the temple from being the center of coronavirus transmission.

Suhartono said it imposed a super strict health protocol to prevent the spread of COVID-19 in one of Indonesia’s main tourist destinations.

In 2019, more than 4 million tourists visited the Borobudur Temple, according to the official.

Every visitor is required to go through temperature check, wearing a mask and keeping physical distance, he said.

Suhartono said the authorities only allow a maximum of 140 visitors every one-hour session, adding that they are prohibited to enter the temple and can only see it from the yard.

Since the pandemic started, he said, the number of visitors has dropped dramatically by 90%, mostly due to the total closure from tourists from March to June.

“We don’t want the Borobudur Temple to be a COVID-19 cluster,” he added.

Fransiska, 46, a visitor, said there was a different feeling when visiting the temple amid pandemic.

“We can only take photos from the yard without being able to go upstairs,” she told Anadolu Agency.

Meanwhile, Rudolf, 41, another tourist, told the agency that he understands the importance of health protocol to prevent the spread of the virus.

“There is no problem as long as it is for our wellness,” he added.

The Borobudur Temple Compounds is one of the greatest Buddhist monuments in the world, and was built in the 8th and 9th centuries AD during the reign of the Syailendra Dynasty.

US stocks closed mixed despite fall in volatility