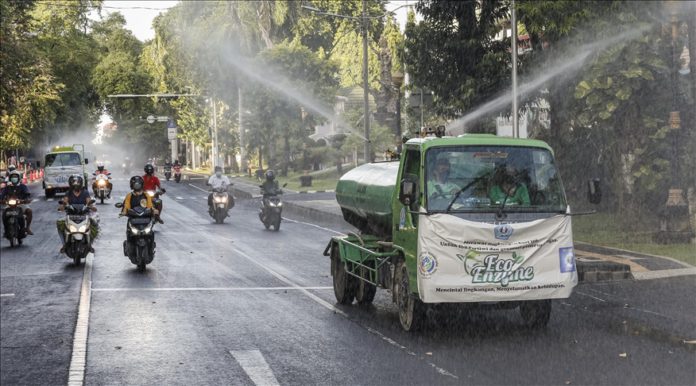 JAKARTA, Indonesia – The number of daily coronavirus infections in Indonesia continued to skyrocket Thursday, making the country the new epicenter of the virus, surpassing India.

“Indonesia has become the epicenter at least in Asia. It has become one of the countries with the highest number of infections, even the number of cases per 1 million population is the highest in the world,” epidemiologist Dicky Budiman from Griffith University told Anadolu Agency.

The Health Ministry reported 54,517 cases on Wednesday, the highest daily surge in Asia and the second-highest in the world after Brazil which recorded 57,664.

The fourth most populous country registered the highest number of daily cases in the world on three consecutive days with 40,427 on Monday and 47,899 on Tuesday.

Budiman said the spike on the most populous island of Java was because of the rapid spread of the Delta variant.

The surge has made it difficult for health facilities to treat patients, with oxygen and medicines becoming rare and more patients dying outside health institutions.

Report COVID-19, a forum for citizen reports, noted that at least 620 coronavirus patients died in self-isolation from June to July 15 due to difficulties in accessing health facilities.

The epidemiologist predicted the number of infections will continue to rise and reach its peak at the end of July or early August.

Budiman said the number of cases will reach 200,000 per day if current restrictions are successful, but it could hit 400,000 if restrictions fail, adding that only 100,000 cases will be able to be detected by a test and contact tracing system.

Indonesia has yet to conduct enough tests so the actual number of infections is much higher than the government report, according to Budiman.

“The worst is yet to come, but it probably won’t be long and if it isn’t handled properly it will be very painful and cause many casualties. This must be prevented,” he added.

Coordinating Minister for Maritime Affairs and Investment Luhut Binsar Pandjaitan, who was appointed by Indonesian President Joko Widodo to handle the surge, said he has prepared for the worst scenario if daily infections hit 100,000.

“We don’t hope it to reach 100,000 cases, but we have planned in case it happens,” Panjaitan said at a virtual news conference.

He said the government has asked hospitals to allocate 40% of their bed capacity for coronavirus patients and turned some flats and hajj guesthouses into emergency hospitals.

The minister said at least 2,000 medical and nursing students who recently graduated will be deployed to help health workers treat COVID-19 patients.

“The government has also ordered 40,000 oxygen concentrators to meet current needs,” he added.