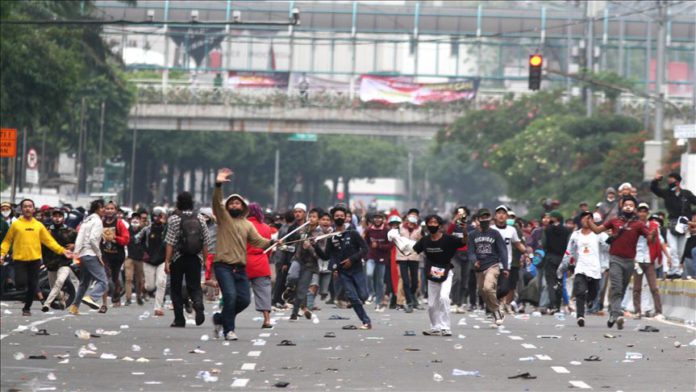 Indonesian police have arrested 1,377 people during continuing protests against the controversial Job Creation Bill in Jakarta that could slash workers protection.

Jakarta police spokesman Yusri Yunus said a number of groups coordinated plans to turn the rallies violent, and that the arrested included 800 students.

“There is an indication that stones and other sharp tools were prepared beforehand,” he told a news conference in the capital Jakarta.

Members of Presidium Alumni 212 and the Islamic Defenders Front on Tuesday staged a protest around the Presidential Palace against the omnibus measure.

“There were rioters who infiltrated the rally and threw stones at police and fellow protesters. The police then used tear gas to disperse crowd,” he said.

The House of Representatives passed the Job Creation Bill on Oct. 5. It has sparked protests from workers, non-governmental organizations and civil society organizations.

Last week, workers from labor unions and federations held a three-day strike to protest the passage of the bill. The Oct. 8 protests also led to riots, and more than 5,000 protesters were detained.

The final draft of the Omnibus Law on the Job Creation, consisting of 812 pages, amends 79 prevailing laws, including the Labor Law, Environmental Management Law and Spatial Planning Law.

Responding to massive rallies, Defense Minister Prabowo Subianto said most protesters have not read the full legislation, and are easily swayed by fake news.

He said there are certain parties provoking the public to reject the legislation.

“I am sure this comes from abroad. There are foreign powers, certain countries that never like Indonesia to be safe and advanced,” Prabowo was quoted by local media as saying on Monday.

EU recovery plan to be presented in a month