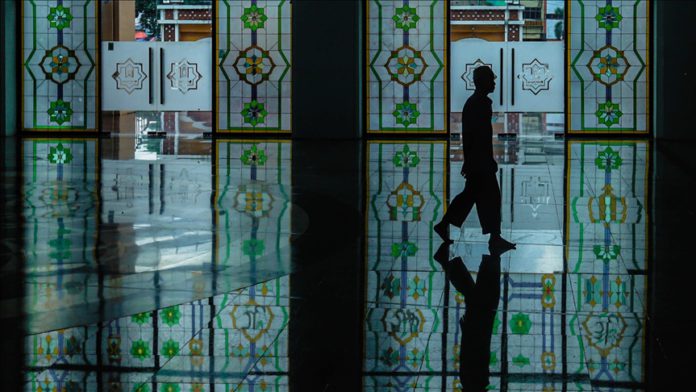 Indonesia called on its Muslim citizens Monday to perform Eid al-Adha prayers at home amid a surge in coronavirus cases in the country.

In a statement, Coordinating Minister for Political, Legal and Security Affairs Muhammad Mahfud MD said the call was backed by a fatwa, or Islamic decree, from religious institutions and was issued to prevent gatherings.

Mahfud urged people to maintain strict health protocols during the slaughter of sacrificial animals and distribution of meat.

“Let’s celebrate Eid al-Adha based on the situation and conditions, the COVID-19 situation, so that there will be no crowds,” he added.

“We won’t be holding Eid prayers and will only slaughter the sacrificial animals on Wednesday morning and it will be limited with strict health protocols,” Abu Hurairah, head of protocol for the mosque, told Anadolu Agency.

Muhammadiyah, one of the largest Muslim organizations in Indonesia, also called on the public not to perform Eid prayers in mosques, open courtyards or other public facilities.

“Eid al-Adha prayers can be performed at home with family members,” said Abdul Mu’ti, the group’s general secretary, in a press release.

The Indonesian government has imposed restrictions on mobility and community activities ahead of the Muslim holiday as the country continued to see a surge in COVID-19 infections.

Police have blocked 1,038 roads on the islands of Java and Bali as well as in Lampung province to prevent people from traveling to their hometowns.

“We have asked people who stubbornly try to go to their hometowns to make a U-turn,” they said.

Earlier, Minister of Religious Affairs Yaqut Cholil Qoumas also urged people not to go to their hometowns ahead of Eid, as it is feared to worsen coronavirus transmission, which is sharply surging due to the spread of the Delta variant of the virus.

In the past two weeks, Indonesia has become the world’s epicenter of COVID-19 transmission, with more than 50,000 new cases daily, according to Worldometer.

The total number of people being tested also dropped to 127,461.

The Health Ministry reported 1,338 more coronavirus-related fatalities, the highest since the pandemic hit the country in March last year, pushing the national death toll to 74,920.

Report COVID-19, a forum for citizen reports, noted that at least 682 coronavirus patients had died in self-isolation since June due to difficulties in accessing health facilities.

Most of them died due to a sudden decrease in oxygen saturation, according to the group.

At least 542,938 patients are still receiving treatment in health facilities or undergoing self-isolation, while the number of recoveries rose to more than 2.2 million after 32,217 patients won their battle against the virus.

Sweden's top football leagues to kick off on June 14