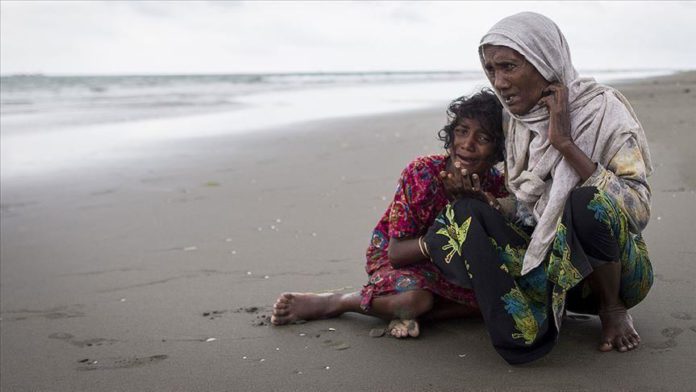 The boat was seen in the Malacca Strait, some 80 to 100 miles near the Aceh province’s waters, according to Miftach Cut Adek, deputy secretary general of Aceh Sea Commander.

He told Anadolu Agency that the refugees were on their way to Malaysia.

“We cannot confirm how many of them aboard, but they are on a large boat,” he said, adding that the fishermen were too far away from the refugee boat to approach it.

“Fishermen usually help them [refugees] when they get nearer to land.”

“We’ve received reports that border patrols have instructions to turn these refugees away. This is unconscionable,” he said, adding that pushing the boat back would violate the country’s international obligations.

Now that they have been alerted to boats in distress, he said, the authorities must immediately rescue, disembark the passengers, provide them with shelter, and ensure their safety.

Hamid said that ASEAN – Association of Southeast Asian Nations – countries are failing to help Rohingya who have fled persecution in Myanmar and the hardships of refugee camps in Bangladesh.

“The Rohingya community’s suffering is a regional issue in need of a humane regional response in line with international law,” he added.

Hamid said Indonesia set an example for regional counterparts when it allowed Rohingya ships onto its shores twice this year.

In September, Indonesia took in 297 Rohingya refugees who landed in Lhokseumawe city in Aceh province, after allowing 99 Rohingya disembark in North Aceh earlier in June.

There are currently some 383 Rohingya at the Lhokseumawe Vocational Center, after at least three refugees died of COVID-19, according to Amnesty International.

“There is no reason Indonesia should lead this refugee crisis alone. There must be shared responsibility among regional countries in order to organize urgent search and rescue and prevent others from facing the same dangers,” Hamid stressed.

Turkey set to send plane to evacuate people from China