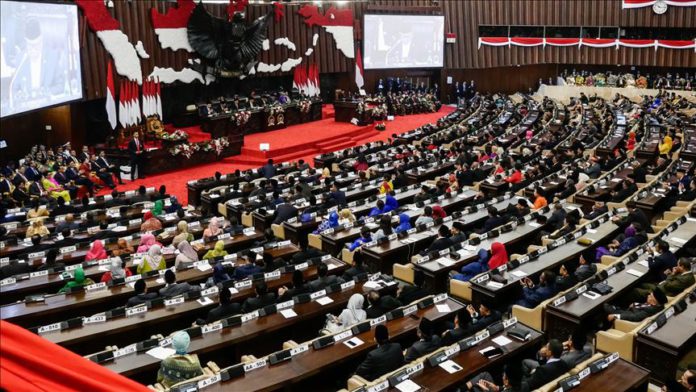 “President Joko Widodo fully supports our firm stance against the Deal of the Century, including the annexation of the West Bank by Israel,” Mardani Ali Sera, Deputy Chairman of the Indonesian Parliamentary Inter-Parliamentary Cooperation Agency (BKSAP), told Anadolu Agency by phone Monday.

Mardani said the rejection was issued in a joint statement between the House and Foreign Minister Retno Marsudi during a previous meeting.

However, he admitted that he had been pressured by the US, while Marsudi continued to oppose the so-called peace plan.

Mardani added that they will continue to work together to mobilize support from the international community to oppose the plan.

Last week, the House of Representatives initiated a joint statement of parliamentarians around the world to reject Israel’s annexation of the Palestinian territories.

The statement was supported by more than 200 MPs from 34 countries and was launched to coincide with World Parliament Day.

This initiative reflects the leadership of the Indonesian Parliament in mobilizing global parliamentary support for the Palestinian cause.

He said the institution would be under the Ministry of Foreign Affairs and tasked with carrying out a special diplomacy function to realize an independent Palestine.

“There needs to be a special institution that has the role of mobilizing the international community’s support to realize Palestinian independence, and if necessary, we can invite the community to this institution.”

During a UN Security Council Open Meeting held last week on the situation in the Middle East, Marsudi stressed three reasons why the international community must reject Israel’s annexation plan.

Second, Israel’s formal annexation plan is a test of the credibility and legitimacy of the UN Security Council in the eyes of the international community. The Security Council must take swift steps in line with the UN Charter.

“Anyone who threatens international peace and security must be held accountable before the UN Security Council. There should not be a double standard,” she added.

Third, the annexation would damage the whole prospect of peace. Annexation will also create instability in the region and the world. For this reason, there is an urgency for a credible peace process where all parties stand on equal footing.

Commission I of the House of Representatives in charge of foreign affairs, defense and information stated their support for the foreign minister’s stance.

“Annexation contravenes principles of internal law and damages relations between the two countries,” Willy Aditya, a member of the commission, told Anadolu Agency.

Palestine and Israel have a long history of conflict, so annexation will only prolong the conflict and cause human suffering.

According to the Indonesian Constitution, freedom is the inalienable right of all nations, so colonialism must be abolished in this world, as it is not in conformity with humanity and justice.

“Therefore, we will bring the warring parties to the negotiation table. There must be no annexation or any form of colonialism that demeans humanity,” Aditya added.

The largest Islamic organization in Indonesia, Nahdlatul Ulama, considers Israel’s annexation of Palestinian territories contrary to international law as outlined in the Charter of the United Nations.

Therefore, it has asked Israel to stop their annexation plan.

“Palestinians have a legitimate right to create a free and independent state. We support the independence of Palestine,” the Head of Nahdlatul Ulama’s Executive Board, Robikin Emhas, told Anadolu Agency.

The organization also urged Middle East countries to unite and provide political support to the Palestinians.

US state heads to polls despite COVID-19 outbreak