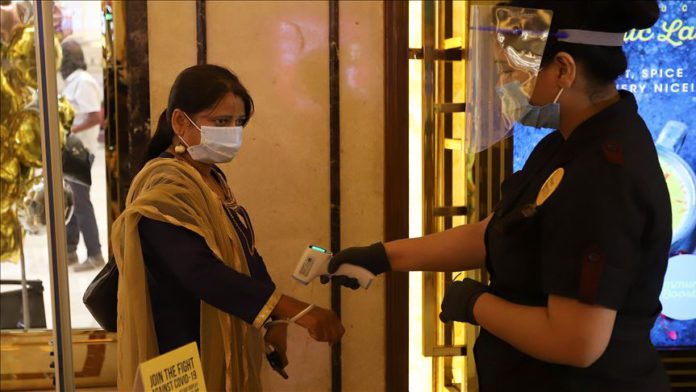 The total number of coronavirus cases in India crossed 8.8M million mark, as the country registered 41,100 new infections over the past 24 hours, the Health Ministry said.

According to a ministry update, at least 447 more people died due to the virus, taking the toll to 129,635.

The country has reported less than 50,000 daily infections for the eighth consecutive day, with the ministry saying that “the daily new cases on an average show a declining trend over the last five weeks”.

While India is witnessing a steady decline in the number of cases, many cities — including the country’s capital Delhi — are once again recording a huge spike in the new infections.

Currently, the capital is one of the biggest contributor of new coronavirus cases in the country followed by southern Kerala state.

On Friday, New Delhi’s Chief Minister Arvind Kejriwal identified the pollution as “one of the biggest factors” for the spike in COVID-19 cases and hoped the situation would come under control within the next seven to 10 days.

Authorities in many states and cities, including New Delhi, banned the use of firecrackers on Diwali festival celebrated on Saturday in a bid to avoid the increase in the level of air pollution.

Despite a ban, bursting of firecrackers at several places brought down the air quality in the capital to “severe” level on Sunday morning, official data showed. The thick blanket of smog also reduced the visibility in the morning.

A relief from the air pollution is expected as weather forecasters have predicted rains in New Delhi and neighboring areas on Sunday.