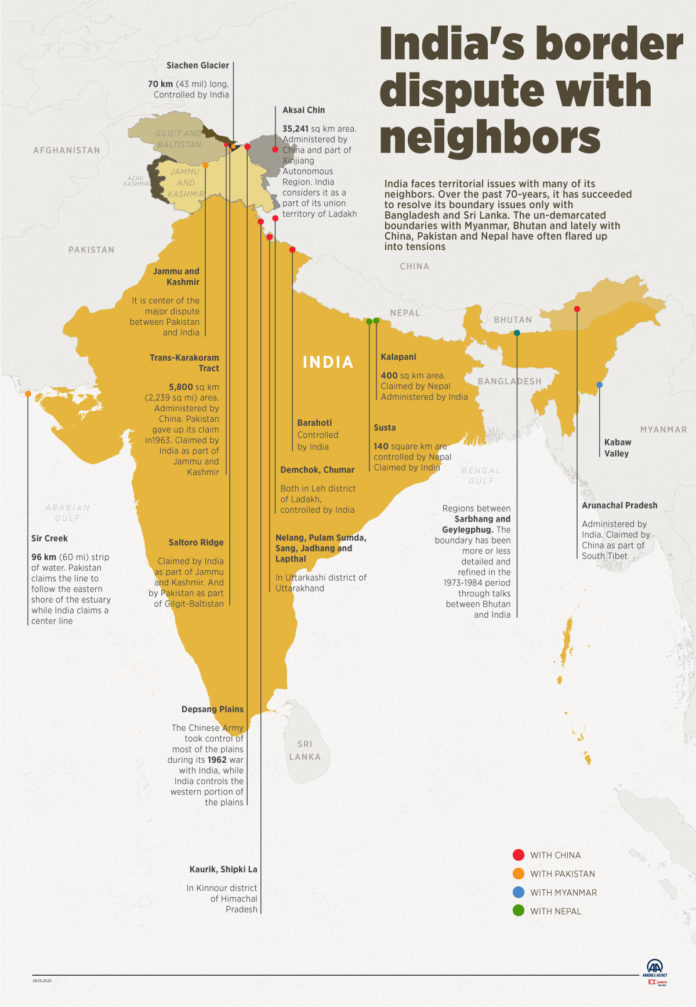 India faces territorial issues with many of its neighbors. Over the past 70 years, it has succeeded to resolve its boundary issues only with Bangladesh and Sri Lanka. The un-demarcated boundaries with Myanmar, Bhutan and lately with China, Pakistan and Nepal have often flared up into tensions.

In 1974, India could resolve its maritime boundary dispute with Sri Lanka by abdicating claim on Katchatheevu — an uninhabited island of 235 acres.

India also settled its land and maritime boundaries with Bangladesh, by resolving the issue of South Talpatti Island or Bangabandhu Island — a small uninhabited offshore sandbar landform in the Bay of Bengal, off the coast of the Ganga-Brahmaputra Delta region.

But there seems no end to boundary disputes with China and Pakistan, which often turn into a major military and diplomatic standoffs. To resolve boundary issues with China, special representatives of both countries have so far held 22 rounds of negotiations since 2003.

Aksai Chin: Located in the northwestern part of the Tibetan Plateau, it is approximately 35,241 sq km in size, administered by China and part of the Xinjiang Autonomous Region. India considers it a part of its union territory of Ladakh.

Depsang Plains: The Depsang Plains are located on the border of the union territory of Ladakh and disputed zone of Aksai Chin. The Chinese Army controlled most of the plains during its 1962 war with India, while India controls the western portion of the plains.

Demchok, Chumar: Both in the Leh district of Ladakh, controlled by India.

Barahoti: In the Chamoli district of Uttarakhand whose grazing fields are disputed by China, which is also in the state of Uttarakhand and is controlled by India.

Trans-Karakoram Tract: An area of nearly 5,800 square kilometers (2,239 sq mi) along both sides of the Shaksgam River, is entirely administered by China as a part of Kargilik County in the Kashgar Prefecture of the Xinjiang Autonomous Region.

It was claimed by Pakistan until 1963, and still claimed by India as part of the Jammu and Kashmir. Pakistan gave up its claim to the tract under a border agreement with China in 1963 with the proviso that the settlement was subject to the final solution of the Kashmir dispute.

Arunachal Pradesh: Arunachal Pradesh is a state of India created on Jan. 20, 1972, and located in the far northeast. The majority of the territory is claimed by China as part of South Tibet.

Siachen Glacier: The Siachen Glacier is located in the eastern Karakorams in the Himalayas just east of the Actual Ground Position Line between India-Pakistan. India controls all of the Siachen Glacier itself, including all tributary glaciers. At 70 km (43 mi) long, it is the longest glacier in the Karakoram and second-longest in the world’s non-polar areas.

They are claimed as part of Ladakh union territory by India and as part of Gilgit-Baltistan by Pakistan. In 1984, India assumed military control of the main peaks and passes of the range, with Pakistani forces into the glacial valleys just to the west.

Sir Creek: The Sir Creek is a 96 km (60 mi) strip of water disputed between India and Pakistan in the Rann of Kutch marshlands. Pakistan claims the line to follow the eastern shore of the estuary while India claims a center line

Dispute between the land in Kabaw Valley near Hollenphai village, Moreh of Manipur state, India and Namphalong village, Tamu of Sagaing Region, Myanmar.

Although claimed by Nepal, Kalapani has been administered by India’s Indo-Tibetan Border Police since the 1962 border war with China. This discrepancy in locating the source of the river led to boundary disputes between India and Nepal, with each country producing maps supporting their own claims. India has now released its new political map which includes all of Kalapani in India without any consent of Nepal.

Susta: Susta is an area under territorial dispute currently in Tribenisusta, Lumbini Zone, Nepal and near Nichlaul, Uttar Pradesh, India. The area under dispute totals over 14,000 hectares (140 square km) and is controlled by Nepal.

The boundary has been more or less detailed and refined in the 1973-1984 period through talks between Bhutan and India.

Regions between Sarbhang and Geylegphug remain undefined. They border the Indian state of Arunachal Pradesh.