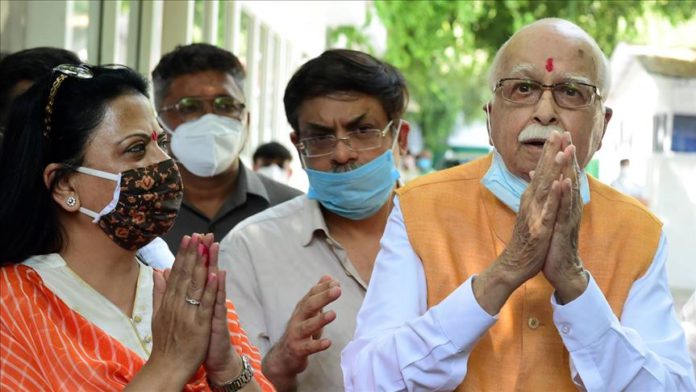 Government ministers and leaders of India’s ruling party on Wednesday welcomed a controversial court acquittal of 32 people accused of criminal conspiracy and inciting a mob to raze a 400-year-old mosque.

Lal Krishna Advani, a former ruling Bharatiya Janata Party (BJP) deputy prime minister and one of the accused, issued a video message saying: “The judgement vindicates my personal and BJP’s belief and commitment towards the Ram Janmabhoomi Movement,” referring to the group that tore down the Babri Mosque in 1992, claiming the site was the birthplace of the Hindu god Rama.

“It is a moment of happiness for all of us, we chanted ‘Jai Shri Ram’ [Glory to Rama] after the court verdict,” he added.

Earlier, a Central Bureau of Investigation (CBI) court acquitted all the 32 accused in the Babri Masjid demolition conspiracy case and ruled that the demolition was not pre-planned.

Murli Manohar Joshi, another senior BJP leader and an accused in the case, said: “It’s a historic decision by the court. This proves that no conspiracy was hatched for December 6 incident in Ayodhya.”

Attacking the opposition Congress, he said: “The decision makes it clear that political bias by the then-Congress government, who indulged in vote bank politics, led them to defame the country’s revered saints, Bharatiya Janata Party (BJP) leaders, senior officials associated with the Vishwa Hindu Parishad (VHP) and various other social organisations.”

“Those responsible for the conspiracy should apologise to the people of the country,” said Adityanath.

The opposition Congress party said the judgment runs counter to the Supreme Court judgment as also the “constitutional spirit.”

Randeep Surjewala, the head of Congress’ communication department, said: “The Supreme Court in its judgment dated November 9, 2019 pronounced by five-judges clearly held that demolition of Babri Masjid as a clear illegality and ‘egregious violation of the rule of law’.”

“A complete travesty of Justice. All charged with criminal conspiracy to demolish Babri Masjid acquitted. It self imploded? The Constitution Bench headed by then CJI had said that demolition was an ‘egregious’ violation of law. Now this verdict! Shame,” Yechury on Twitter.

The 400-year-old Babri Mosque in the city of Ayodhya in Uttar Pradesh province was razed on Dec. 6, 1992 by a large group of activists belonging to the Hindu nationalist organizations Vishwa Hindu Parishad (VHP), affiliated to Rashtriya Swayamsevak Sangh (RSS). They claimed that the mosque stood on the birthplace of deity Ram.

The Supreme Court, which delivered the ownership verdict in November last year, however, disputed that the mosque had been constructed on any demolished temple.

The Babri Mosque was built in 1528 by Mughal military officer Mir Baqi, on the orders of Emperor Babur.

The mosque was targeted after a political rally involving about 150,000 Hindu activists and BJP volunteers, who had gathered at the site, turned violent.

A consequent probe into the incident found 68 people responsible, including many senior leaders of the ruling BJP and the VHP, who allegedly delivered provocative speeches inciting the mob to tear down the structure.

Currently, the BJP is in power both at the national level and in the state of Uttar Pradesh.

Argentina: Protests over 'coup' in Bolivia