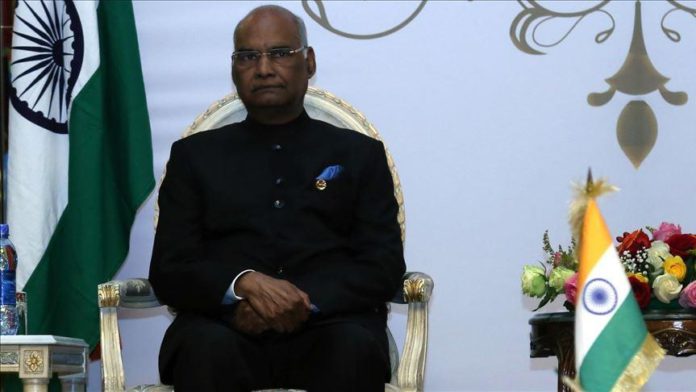 Indian President Ram Nath Kovind has said violence in the disputed Jammu and Kashmir is an aberration, and Kashmir has started to realize that democracy can reconcile all differences and bring out the best of citizens’ potential.

Kovind was addressing the 19th annual convocation of Kashmir University on Tuesday.

He is the highest-ranking Indian official to visit Kashmir after August 5, 2019, when India scrapped the region’s autonomous status and divided it into two federally ruled territories after jailing nearly the entire local elected politicians, including three former chief ministers, besides deploying tens of thousands of additional paramilitary soldiers to prevent imminent anti-India protests that have been the hallmark of the 30-year-old insurgency.

“It was most unfortunate that a tradition of peaceful coexistence was broken. Violence, which was never part of Kashmiriyat, became the daily reality,” Kovind said.

Kashmiriyat, a term loosely used for a tradition of interfaith tolerance in Kashmir, has been criticized by many Kashmiris as an official construction to give Kashmiri anti-India resistance a religious color.

“It is alien to Kashmiri culture, and it can only be termed as an aberration, a temporary one, much like a virus that attacks the body and needs to be purged. Now there is a new beginning and determined efforts to regain this land’s lost glory,” he added.

About 80 militants, the overwhelming majority of whom are young Kashmiris with no or little training in firearms even, have been killed by Indian forces in several operations so far this year. In the past one month alone, families of the two deceased “militants” have disputed government claims and termed their kin as “innocent civilians.”

While India calls the militants terrorists and their actions terrorism, the majority of Kashmiris hail them as heroes, as was evident in massive funerals of dead militants. Since last March Indian government has stopped handing over bodies of militants to their kin for burial. Instead, they are buried in remote hamlets.

President Kovind told the convocation that “democracy lets you build your own future, a peaceful and prosperous tomorrow”.

“The youth and women especially have high stakes in it, and I am sure they will not let go of this opportunity to rebuild lives and rebuild Kashmir,” he said amid rising criticism from local pro-India politicians that democracy was being subverted again in Kashmir like in the past.

Three-time former Kashmir chief minister and standing member of Indian parliament Farooq Abdullah told Indian news portal The Print on Monday: “We just live. We aren’t free people. We are slaves. That is what we are.”

Ennahda slams calls for excluding it from Tunisia gov’t