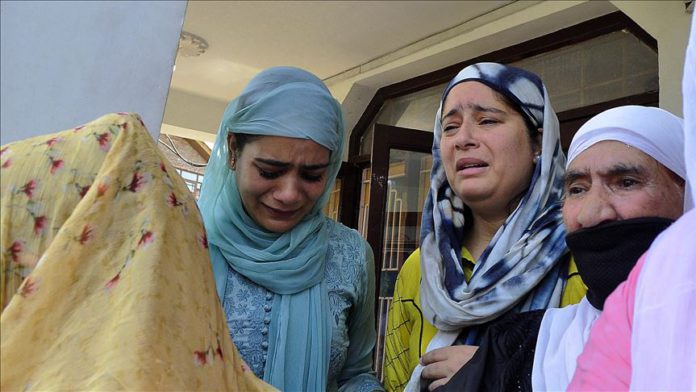 After the heart-wrenching images of a 3-year-old boy squatting on the lifeless body of his grandfather went viral in the Indian-administered Kashmir on Wednesday, the coverage of the incident in the mainstream Indian and Kashmiri media produced different narratives.

While the Indian media mostly blamed militants for the killing of the 65-year-old man, showing that government forces rescued the boy, the Kashmiri media and journalists reported the incident with a different narrative, bringing out versions of the deceased man’s family and questioning the circulation of photographs of the kid on the internet.

When the incident came up, the Indian news channel NDTV reported that “Boy, 3, Survives J&K Terror Attack, Pics Show Him Near Grandfather’s Body”

While blaming the militants for the attack, the news report read: “A three-year-old boy survived as his grandfather was killed in a terror attack on the Central Reserve Police Force (CRPF) in Jammu and Kashmir’s Sopore town this morning. A CRPF jawan was also killed in the line of duty as terrorists opened fire on a patrol team.”

Also THE TIMES OF INDIA reported that militants killed the deceased man with the headline: “Heartbreaking: Child weeps over body of grandfather killed in cross-firing in Kashmir”.

“In a heart-wrenching incident, a three-year-old child was rescued by the Jammu and Kashmir police, while his grandfather succumbed to the injuries after the terrorists attacked a Central Reserve Police Force (CRPF) patrol party, near the car of the deceased man in which the child was sitting with him in Jammu and Kashmir’s Sopore,” the report read.

One of the leading newspapers in the region, Kashmir Reader reported: “Family disbelieves police claim, nephew says no bullet mark on car”.

The report said the deceased’s family members do not believe the police version that Bashir Khan was killed when militants opened fire on paramilitary CRPF and policemen at Sopore on Wednesday morning.

“Khan’s nephew, Aijaz, told Kashmir Reader, ‘I saw his bullet-strewn body. To see how he had died, I inspected his car, which had not even a single bullet mark. I even checked its bottom. I don’t know how he was taken out from the car, laid on the ground, and how the little kid was sitting on his dead body,’ according to the news report.

An online news portal, Kashmirwalla, also reported that a family member of the deceased said: “CRPF killed him, child kept on his body.”

The news report said that in one video the wife of the killed civilian has alleged that government forces placed the child on the civilian’s body, and that she said: “They killed him and then kept his three-year-old grandson on his body,” as she is consoled by mourning women at her house.

“The child’s clothes are soaked with his grandpa’s blood. He was not a militant. He was a petty employee,” the family said according to the report.

The report said that heart-rending images of the boy sitting on his grandfather’s body sparked outrage.