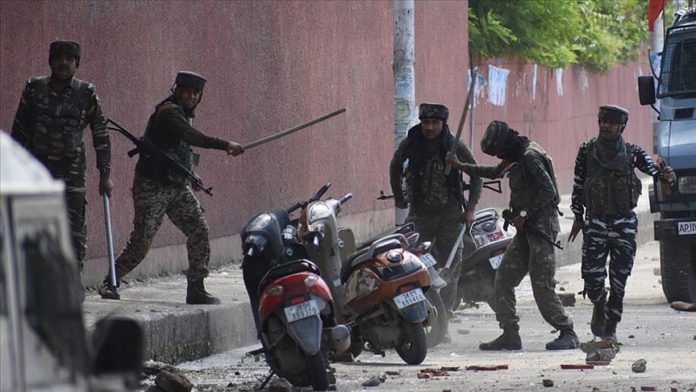 Three photojournalists in the Indian-administered Kashmir were allegedly beaten by government forces while they were covering a gunfight between militants and security forces in the Pulwama district of southern Kashmir, one of the journalists has told Anadolu Agency.

On Tuesday, Kamran Yousuf, working with an India-based news portal Newsclick, was severely thrashed while the other two photojournalists identified as freelancer Faisal Bashir and Irshad Reshi working with Urdu news wire in the region were also beaten.

Yousuf told Anadolu Agency over the phone that he was just doing his professional work when the incident happened.

“I had only clicked a few pictures when the police shouted at the journalists to go back. As the journalists started to move, I also began to move but at that time some six to eight police came around and started beating me without any reason. Some of them kicked me and some others were hitting me with their lathis [martial-arts stick]. They continued to thrash me until I managed to run away,” he added.

The 25-year-old Yousuf is currently being treated at a tertiary care hospital in the main city of the region, Srinagar, due to ‘assault and trauma’. He has suffered injuries in one of his arms and in the right leg.

“There is a fracture in my right leg and also swelling on my right forearm,” Yousuf said.

The other two photojournalists, Bashir and Reshi, told Anadolu Agency that the police thrashed them without any reason

Faisal said: “They were angry because we were taking pictures and they shouted at us to move away. While we were moving they hit me with a stick on my back and tried to damage my camera. I have swelling on my back and I cannot walk properly.”

Reshi added that he has received blows on his arm and also suffered from swelling. “I am not able to pull my arm,” he also said.

After facing limited autonomy of the region since Aug. 5, 2019, the journalists in Kashmir have been subject to continuous threats, summons and beatings while many have been slapped with terror laws as well.

Many working journalists in the region today took to social media to express their dismay over the ‘normalization of assaults on Kashmiri journalists’.

Qadri Inzamam, a Kashmiri journalist and assistant editor for Indian Magazine Outlook, asked on Twitter: “Are we supposed to normalize assaults on Kashmiri Journalists now? I mean, are we there already?”

Yusuf Jameel, a senior journalist in the region, also wrote that thrashing, harassing, and intimidating journalists in Kashmir is not something new. “We have lived with and endured it for a few years,” he said, adding: “more disgusting rather despicable is that the authorities after every such incident assuring ‘it will not happen again, I see it as rubbing salt on the wounds. Stay strong buddies’.”

Jameel while speaking to Anadolu Agency said they no longer expect action from authorities as these incidents have become a routine now.

The Kashmir Press Club, a local journalistic body, in a statement on Tuesday also condemned the assault on the journalists and demanded strong action against the police involved in the assault.

It urged the authorities to stop targeting journalists in the region while asking them to respect and uphold the press freedom.

Anadolu Agency repeatedly tried to contact Vijay Kumar, the police head in the region, but the officer did not respond to the calls.

However, Nawaz Ahmad, a police officer of Kakpora police station, told Anadolu Agency that no such incident has taken place. “We have not beaten any journalist. We only told them to move away from the operation site,” Ahmad added.

When asked about a video uploaded Tuesday on social media clearly showing that Kamran Yousuf is being beaten by the forces, Ahmad said he had no knowledge about it but that he would check.

Meanwhile, an operation at the Marwal area of south Kashmir’s Pulwama district was called off after militants managed to flee from the security grid, a police source told Anadolu Agency.