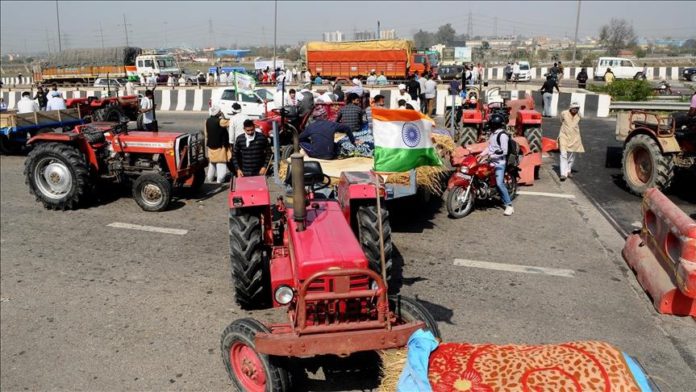 Indian farmers, protesting against the three new farm laws, have started a protest near parliament on Thursday to renew their demand for repeal of laws.

Hundreds of farmers have been encamping on highways outside the capital New Delhi since November last year against the new laws which they say will threaten their livelihoods, and benefit large corporations.

In a fresh attempt to increase the pressure on the government of Hindu nationalist Bharatiya Janata Party, a group of 200 farmers arrived under police escort at the protest site of Jantar Mantar in the heart of New Delhi.

The protest site is close to the parliament, where the monsoon session of parliament began this week.

During the protest at Jantar Mantar, the protesters also held farmers’ parliament.

“Farmers’ parliament proceedings has begun. Farmers are paying tribute to Shaheed Farmers,” Yogendra Yadav, a leader from Swaraj India organization, which is participating in the ongoing protests, wrote in a tweet.

Sukhdev Singh Kokri, a farmer leader, told Anadolu Agency that the protest will take place every day till the parliament session is over.”

Earlier in the morning, several lawmakers from the main opposition Indian National Congress party staged a protest at parliament house against the three laws.

While several rounds of talks with the government have failed, farmer leaders insist on a total repeal of the laws.

On Thursday, Indian Agriculture Minister Narendra Singh Tomar again said the government is ready for talks if the farmers convey the objections about the farm laws.

Delhi Police in a statement on late Wednesday said that after rounds of negotiations, the farmer groups were permitted to protest at Jantar Mantar in “limited numbers, not exceeding 200 people” from 11 a.m. to 5 p.m. (0530-1130GMT) daily.

It is the first time that farmers have been allowed to protest in New Delhi since Jan. 26 this year on Republic Day, when heavy clashes between the farmers and police took place at several places in New Delhi, with situation worsening in Central Delhi where farmers managed to enter the historic Red Fort.

In January, the Supreme Court also ordered an indefinite stay on the implementation of the new laws, but farmers insist on a full repeal.

The movement, one of the biggest challenges Prime Minister Narendra Modi has faced since coming to power in 2014, has also drawn international support.