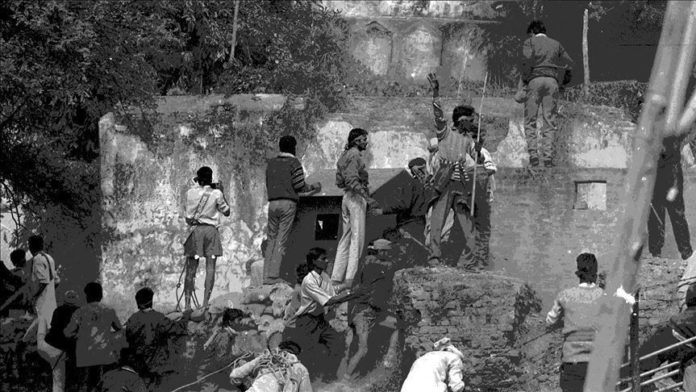 A special court in India will deliver on Wednesday the verdict in the criminal case related to the Babri mosque demolition, almost 28 years after the structure in the Ayodhya town was pulled down.

Last month, the Supreme Court had set Sept. 30 as the deadline to conclude the trial and pronounce the judgment.

However, many senior defendants above 90 years of age may not be able to attend the court proceedings on that day due to health concerns although they are legally required to be present in court. It is not clear what arrangements the court would make for them.

They have been ordered to be present in the court on the day of the verdict. Kalyan Singh was the chief minister of Uttar Pradesh when the mosque was razed in 1992. Nritya Gopal Das is currently the chief of the bodies formed to undertake the construction of the Ram temple in Ayodhya.

The Babri Masjid in the city of Ayodhya in Uttar Pradesh was razed on Dec. 6, 1992 by a large group of activists belonging to the Hindu nationalist organizations Vishwa Hindu Parishad (VHP), Rashtriya Swayamsevak Sangh, and their affiliates as they believed that it stood on the land which was the birthplace of deity Ram.

Hindus believe the city of Ayodhya is the birthplace of Ram, a major deity of Hinduism and that Babri Masjid, which was built in 1528-29 by Gen. Mir Baqi, on the orders of Mughal emperor Babur — built after demolishing a Hindu temple that preexisted at the site. Hindus revere the disputed site as the birthplace of Ram and have been demanding the construction of a grand temple on it.

The medieval mosque was targeted after a political rally involving about 150,000 Hindu activists and BJP volunteers at the site of the Babri mosque became violent.

They outnumbered the security forces and pulled down the mosque. A consequent probe into the incident found 68 people accountable, including many senior leaders of the ruling BJP and the VHP, who allegedly delivered provocative speeches inciting the mob to tear down the structure. Currently, the BJP is in power both at the national level and in the state of Uttar Pradesh.

The demolition ignited communal riots across the country between Hindus and Muslims, resulting in the death of at least 2,000 people, most of them Muslims.

Said Zafryab Jilani, the spokesperson of All India Muslim Personal Law Board — a representative body for Indian Muslims — told Anadolu Agency: “We expect the court will convict the accused persons involved in the demolition of the mosque. But we cannot predict who will be convicted and who will be acquitted and what will be the quantum of punishment. The court will base its decision on the testimony and other evidence presented during the trial.”

According to Jilani, the top court had said the demolition of Babri Masjid was unlawful and asked the government to provide an alternative piece of land to the Muslim party to build a mosque.

He said: “The apex court has observed that the destruction of the mosque was illegal, so we are convinced that those responsible for it would be punished by the court.”

Jilani was referring to the Supreme Court judgment delivered in November last year wherein the court asked the disputed land to be handed over to a trust to be created by the Indian government to construct the Ram temple.

The court also asked the government to give an alternative plot of land in another place to the Uttar Pradesh Sunni Central Waqf Board for constructing a mosque to replace the demolished mosque. While the court ordered the construction of a Hindu temple on the site, it said the destruction of the mosque was illegal.

On the other hand, KK Mishra, the lawyer for 25 out of 32 BJP leaders, accused of the demolition of Babri mosque, said all allegations against the defendants are baseless and so they should be acquitted. Now it has to be seen what the court decides, he said.

The court has asked all the accused persons to be present in the court on the day of the verdict, but there is a big problem in that, said Mishra.

“Some of the defendants are 90 or above 90 years old. Advani is 92, while Kalyan Singh is admitted to the hospital. Another defendant Nritya Gopal Das is also in hospital. So it is difficult to say if they would be fit by Sept. 30 and able to attend,” Mishra added, while noting that Advani, Murli Manohar Joshi, and some other senior accused persons in the case had recorded their statements via video conferencing.

Mishra told Anadolu Agency: “But according to the law, now they will have to be present when the verdict is delivered. The Court will see what other arrangements could be made if some of the defendants are not fit and remain hospitalized on Sept. 30. I think the court will issue some orders in this regard soon, but right now, I can’t say who will attend and who will not.”