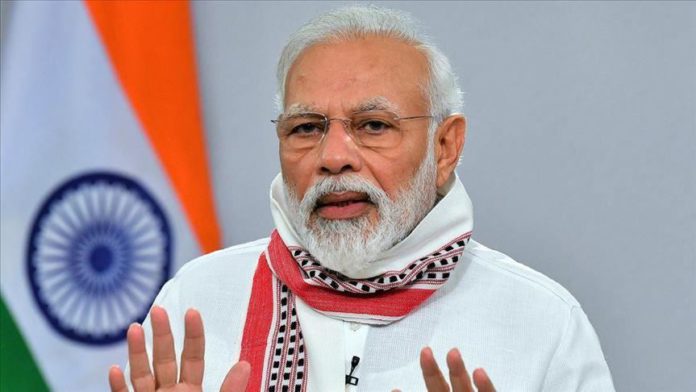 All is set for the groundbreaking ceremony of the “grand” Ram Temple at the site of the demolished historic Babri Mosque in the northern Indian city of Ayodhya on Wednesday.

Prime Minister Narendra Modi will lay the foundation stone to mark the ruling Bharatiya Janata Party’s accomplishments of its two major poll planks — that is the annexation of Kashmir and construction of Ram Temple at the site of the mosque, claimed by Hindus as the birthplace of Lord Rama.

According to Ram Janmabhoomi Teerth Kshetra Trust, a body formed to facilitate construction of the temple, all arrangements are in place to receive prime minister.

The local administration is also leaving no stone unturned to make the ceremony a success.

“All preparations for Aug. 5 are on to make the event a grand success. We are ensuring that SOPs [Standard Operating Procedures] are followed due to COVID-19 pandemic,” an official from district administration told Anadolu Agency over the phone on condition of anonymity due to restriction on speaking to the media.

The decades’ long dispute between Hindus and Muslims over the ownership of the site was settled by Indian Supreme Court last year in November when it handed over the site to Hindus and allowed construction of a temple.

The case pertained to a 16th-century mosque, which was demolished by a frenzied Hindu mob in December 1992. The court also directed authorities to allow a separate land in the outskirts of Ayodhya city to the Sunni Central Waqf Board to build a new mosque.

Built-in 1528 under the rule of first Mughal Emperor Babur, the grand mosque along with a land of 2.77 acres became center of a dispute in the latter half of 19th century when a section of Hindus said it was the birthplace of King Rama, who is said to have ruled the region somewhere between 869,108 to 18.14 million years ago. Hindus believe that Rama was the incarnation of god Vaishnava.

On court orders, the Uttar Pradesh state government has handed over a five-acre land to the Waqf Board on the outskirts of the city as compensation to build the mosque. The Board, which works under the government has decided to start the construction of the mosque soon.

Muslims not happy, but will respect the verdict

Many Muslim leaders, however, said they are not happy with the arrangement of alternate place for the demolished mosque has not been accepted by the majority of community members.

“Muslims have not accepted the office of the land to compensate the Babri Mosque. Acceptance of this land by Sunni Waqf Board does not amount to its acceptance by Muslims of India. The Supreme Court verdict was respected by Muslims, but no one was happy with it,” said Zafaryab Jilani, senior lawyer, who fought the legal battle for 27 years for the ownership of Babri Mosque.

Another Muslim leader Tasleem Rehmani said Muslims have not reconciled with the court verdict.

“A government body has announced that they will build the mosque in Ayodhya. But no Muslim has accepted the construction of the new mosque as well,” he said.

Chairman of the Waqf Board, Zufar Ahmad Farooqui, however, said that most Muslims have accepted the court verdict and want to now see life beyond the dispute.

“Mosque land has been given by Supreme Court judgment to Sunni Central Waqf Board which has constituted a trust to build a new mosque,” he said.

He said the new mosque will be of the same size as the demolished Babri Mosque. He asked the Muslim community to give up now “emotional and reactionary issues.” and focus entirely on their educational and economic development.

A historical moment for Hindus

Hindu leaders say it was a historical moment for them to get the birthplace of Lord Rama back.

“It is a glorious moment not only for the country, but Hindus living across the globe. After 492 years, this is the historic moment, for which everyone was waiting. We are happy that now it has finally come,” said Vinod Bansal, national spokesperson for Vishwa Hindu Parishad (VHP), the organization, which was spearheading the campaign of building temple.

“The matter has been already settled and I do not think anyone will raise this issue again. This will be watched by people across the globe. I feel 99 percent Muslims are happy with this and the remaining one percent is playing politics, “he added.

Rehmani said for the Indian Muslims, the issue of the Babri Mosque will remain alive in the same way as the revocation of special status for the people in Kashmir.

Political analyst Urmilish Singh said the government chooses Aug. 5 for the foundation laying ceremony to divert attention from its failure to combat the COVID-19 pandemic.

“Government has failed to manage the COVID-19 crisis. I believe they have chosen the Aug. 5 to divert the attention from their failure to tackle COVID-19. Laying the foundation of temple exactly a year after revoking Kashmir’s special status will also complete their poll objectives,” he said.