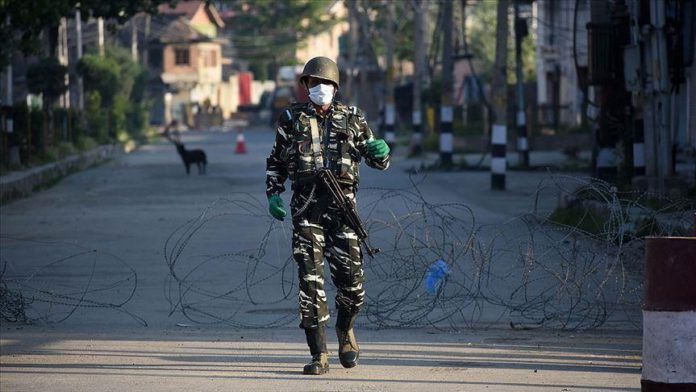 Hundreds of Rohingya refugees were seen fleeing from relief camps in the Jammu region of Indian-administered Kashmir on Sunday, fearing detention by government authorities.

The crisis among the ethnic minority Muslim group from Myanmar was witnessed after the regional administration of Jammu and Kashmir detained over 160 refugees on Saturday for being “illegal immigrants.”

The authorities lodged them in a ‘holding center’ that had been set up under the Foreigners Act in the Hiranagar sub-jail of Kathua district in Jammu which was established under a government notification dated March 5.

A police official on condition of anonymity while confirming the development told Anadolu Agency that the process of identifying the illegal immigrants has been taken up after getting approval from India’s Ministry of Home Affairs.

“All details of nationality, the time since they have been settled here and total family members are being collected to carry out the verification process. After due process, the immigrants who were not holding valid documents have been sent to a holding center and will be ultimately deported back,” the official said.

The official said the process is still going on.

Where will we go?

Dil Mohammad, a Rohingya who has been living with his family in the Kiryani Tallab area of the Jammu region for the past 10 years, is worried over the action of the Indian government.

“I have been living here since 2010, and many times the police have come for verification. But this is the first time we are being detained,” Mohammad told Anadolu Agency.

He was among hundreds of refugees who were walking the streets on Sunday in search of a possible safe place.

“We have nowhere to go. Our conditions are worsening. If the Indian government wants us to leave, at least they should have made an announcement,” Mohammad said.

He said the police came into their camps Sunday and detained people, and this morning they came again and people panicked and left the camps.

“This has been our plight. We want an end to it. We have not come here deliberately. Our suffering has compelled us to move from our country,” Mohammad said.

Mohammad Haneef, a Rohingya community leader, told Anadolu Agency they are distressed over the developments.

According to Haneef, there are over 6,000 refugees living in 39 camps in the Jammu region.

“We are distressed now. We are not able to figure out what is happening,” he said.

Thousands of Rohingyas have been living in the Jammu region since 2007 when they fled their country.

Ali Johar, the co-director of a New Delhi-based humanitarian group who works for the Rohingyas’ rights, said he has also received calls from refugees to save their family members.

“We have received input that mostly male members have been detained, but there are reports of the detainment of women, children and elderly people as well.”

He said he is not sure what has led to this but mentioned that all refugees are following the laws and procedures and have UNHCR refugee ID cards.

While the UNHCR has provided refugee ID cards to half of the refugees from Myanmar, India does not recognize their cards, since it is not a signatory to the UN Convention on Refugees.

According to Amnesty International, more than 750,000 Rohingya refugees, mostly women and children, fled Myanmar and crossed into Bangladesh after Myanmar forces launched a crackdown on the minority Muslim community in August 2017.

More than 34,000 Rohingya were thrown into fires, over 114,000 more were beaten, and as many as 18,000 Rohingya women and girls were raped by Myanmar’s army and police, said the OIDA report, titled Forced Migration of Rohingya: The Untold Experience.

Anadolu Efes, Bayern Munich to face off on March 29 in...