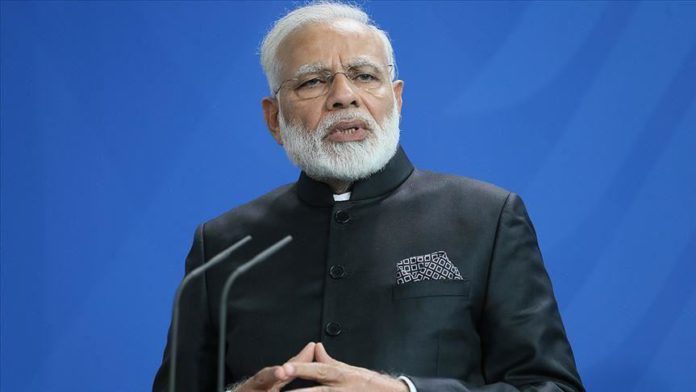 Officially beginning a controversial project that in the past has worsened religious rifts, India’s prime minister on Wednesday laid the cornerstone for a new Hindu temple at the site of a historic Muslim mosque demolished by a Hindu mob some 30 years ago.

The 16th-century Babri Mosque in the northern Indian state of Uttar Pradesh was torn down by Hindu hardliners in 1992, triggering violent clashes between Hindus and Muslims.

Returning to city of Ayodhya after 29 years, Narendra Modi called the moment historic, saying “the country is emotional today, [as a] years-long wait is finally over.”

India is creating a “golden chapter” with a new Temple of Ram, he said, adding that millions of Indians “cannot believe that this day has come.”

He said that “call of Jai Siyaram” (glory to Lord Ram) is resonating not only in the city but throughout the world today.

Saying that finally a grand temple will be built for “our Ram Lalla [deity] who had been living under a tent, once the temple comes up,” Modi claimed it will bring new avenues and boost the economy in the region. He said the temple will be a modern symbol of Indian culture and nationalist feelings.

A 40-kilogram silver brick was used as the controversial temple’s cornerstone.

The disputed site has been a source of tension between the two major communities in India. Over 175 guests, including 135 spiritual leaders, were invited for the ground-breaking, which got wall-to-wall coverage on Indian TV.

The decades-long dispute reached a landmark last November when India’s Supreme Court ruled that a temple could be built at the site, over the fierce objections of India’s Muslim community. Hindus claimed the site was the birthplace of one of their gods, Lord Ram.

The case pertained to a 16th-century mosque, which was demolished by a frenzied Hindu mob in December 1992. The court also directed authorities to allow a separate land in the outskirts of Ayodhya city to the Sunni Central Waqf Board to build a new mosque.

Built-in 1528 under the rule of first Mughal Emperor Babur, the grand mosque along with a land of 2.77 acres became center of a dispute in the latter half of 19th century when a section of Hindus said it was the birthplace of King Rama, who is said to have ruled the region somewhere between 869,108 to 18.14 million years ago. Hindus believe that Rama was the incarnation of god Vaishnava.

On court orders, the Uttar Pradesh state government has handed over a five-acre land to the Waqf Board on the outskirts of the city as compensation to build the mosque. The Board, which works under the government has decided to start the construction of the mosque soon.

Muslims in the country keenly watched the ceremony, with a top Muslim body saying there is no need to be heartbroken. “Babri Masjid [mosque] was and will always be a Masjid. Hagia Sophia is a great example for us,” the All India Muslim Personal Law Board said on Twitter, citing last month’s restoration in Istanbul, Turkey of the iconic Hagia Sophia into a mosque.

On Wednesday morning, India’s most-recognized Muslim politician Asaduddin Owaisi, head of the All India Majlis-e-Ittehadul Muslimeen, said on Twitter that Babri Masjid will remain “alive.” His party’s Twitter handle tweeted, “What all should we move on from? Gandhi’s killing, massacre of Sikhs, demolition of Babri Masjid, 2002 riots of Gujarat. There is no more space to move on; there is only space to fight against this government in a democratic manner.”

On Wednesday afternoon, the hashatg #BabriZindaHai (Babri is alive) started trending on Twitter.

Lawyer Zafaryab Jilani, who fought the 27-year-long legal battle over the ownership of Babri Mosque, told Anadolu Agency, “The Supreme Court verdict has been accepted, because the judiciary is respected. But I don’t think Muslims are happy at heart,” he said.

Iqtidar Khan, professor of Islamic studies at New Delhi-based Jamia Millia Islamia University, told Anadolu Agency that Muslims used to be targeted by fanatic groups in the past because of this dispute and hoped that will end now.

“Today the temple is coming up because they are implementing the verdict of the Supreme Court. This was a long-pending issue and we have seen fanatic groups targeting Muslims for it. Now since the issue has been settled, I think such attacks should end now,” he said.

“Many pro-Hindutva or Hindutva-subscribing political groups may vie in competition for supremacy and a better slice of gains in future. The basic coat on the canvas of polity is Hindutva now,” Govindacharya told the local news agency Press Trust of India.

Spokesman for Vishwa Hindu Parishad [Universal Hindu Council] Vinod Bansal told Anadolu Agency that today’s “glorious moment will mark the beginning of Ram Rajya [Hindu Lord Ram’s nation] in the country. With today’s event, anti-Hindu, anti-national and Muslim-appeasement politics will end. It is a new era not only for India, but for the globe wherever Ram Ji followers are.”

Navnita Chadha Behera, a political scientist at Delhi University, told Anadolu Agency that she is “deeply concerned about this new India. This is not the India I know. They are trying, and to some extent they have succeeded [in making Hindutva the core of Indian politics].”