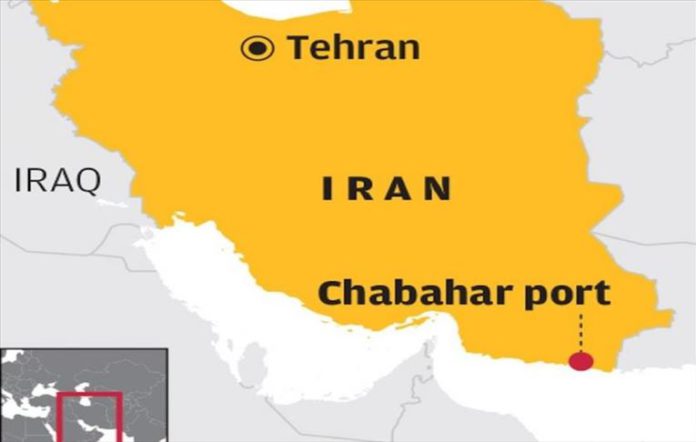 India seems to have grown uneasy over the growing closeness between Iran and China, as the two countries hold negotiations to finalize a 25-year strategic deal, Anadolu Agency has learned.

Speculation is rife that the $400 billion deal could pave the way for China’s investment in Iranian ports, including the strategic Chabahar Port in the southeastern Sistan-Baluchistan province.

India has high stakes in Chabahar, which is its most important gateway to Afghanistan and Central Asia. The port city is located 1,400 kilometers from India’s commercial capital Mumbai.

Last week’s whirlwind, unscheduled visits by two senior Indian ministers to Tehran, which sent regional watchers and policy wonks into a tizzy, has to be seen in that context.

Rajnath Singh became the first Indian Defense Minister to visit Iran in almost two decades. He made a brief stopover in Tehran last Saturday and held talks with his Iranian counterpart Amir Hatami.

The two sides said the agenda of the meetings was to “take forward bilateral cooperation” and “discuss important regional security issues.”

While the official statements left everyone guessing, the two back-to-back visits expectedly generated a buzz in both Iran and India. Singh’s visit, in particular, was unusual.

According to sources, the visiting Indian ministers sought during discussions with Iranian officials to get assurances that their involvement in Chabahar will not be affected by Iran-China deal.

Iran, India and Afghanistan had signed a trilateral transit agreement in 2016 that allowed the transfer of Indian goods to Afghanistan via Chabahar Port, ending India’s dependence on Pakistan’s ports.

New Delhi and Tehran also discussed a memorandum of understanding to construct a 628-km railway line from the port city of Chabahar to Zahedan in southeastern Iran.

This rail project, however, failed to make headway. Recently, reports emerged that Iran had dropped India from the project, estimated to be around $1.6 billion, after the two sides reportedly “failed to reach an agreement” owing to US sanctions.

The revelation came at a time when the ambitious Tehran-Beijing deal surfaced up, becoming a “source of concern” in New Delhi, which sees Chabahar as a gateway to Afghanistan and Central Asia.

“Chabahar connects India to Afghanistan, where India’s presence is linked to its rivalry with neighboring Pakistan. Both see Afghanistan as a proxy battleground,” the source told Anadolu Agency.

As a result, India has been “genuinely worried” about China gaining foothold in Chabahar, after Iran dropped New Delhi from the rail project and started negotiating a long-term deal with Beijing.

The visits of the Indian ministers to Tehran, the sources said, mark a fresh move by New Delhi to “regain the lost ground” and work out a way to keep India’s interests in the region protected.

It comes even at a time of heightened tensions between India and China following a series of clashes between the two armies in the border region of Kashmir.

That also explains the Indian defense minister’s visit to Tehran, which is seen by observers as “unusual”.

A former Iranian diplomat, who served in India, said New Delhi’s “growing ties” with the US and Israel under the Narendra Modi government has “not gone down well with Tehran”.

“It is only natural that Iran will secure its own interests, and long-term agreements with allies like China and Russia are a move in that direction,” he told Anadolu Agency, wishing anonymity.

Alireza Ahmadi, a Tehran-based geostrategic analyst, opines that all is not lost yet. The recent visit of the Indian ministers, he said, is to continue “open and stable dialogue” between the two Asian countries.

“Whether this 25-year deal with China, which is currently just a political agreement, ever becomes operational is still an open question,” he said. “So there might be opportunities for India down the road.”