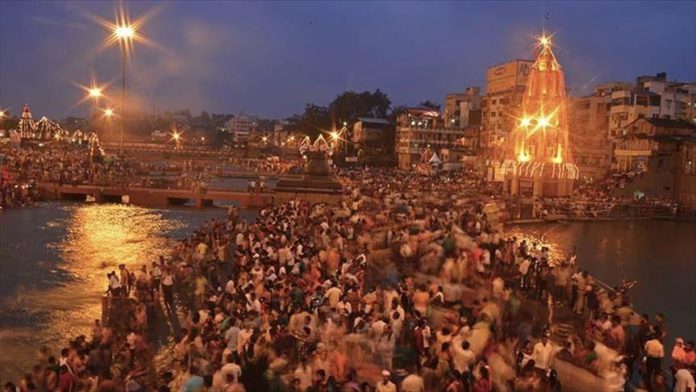 India’s Health Ministry on Sunday called for stringent COVID-19 measures during a Hindu religious festival expected to draw millions of people to the northern Uttarakhand state next month.

The Kumbh Mela, a Hindu festival considered one of the world’s largest religious gatherings, is celebrated four times over the course of 12 years.

There is a “potential of an upsurge in cases in the local population… during the Kumbh Mela,” Rajesh Bhushan, a ministry official, said in a statement.

He said a team of experts that recently visited Uttarakhand to review preparations for the festival found that “10 to 20 pilgrims and 10 to 20 locals were testing positive for COVID-19 on a daily basis.”

“This positivity rate has the potential to rapidly turn into an upsurge in cases, given the expected large footfall during Kumbh,” he said.

Some 3.2 million devotees attended the first part of the festival in the city of Haridwar on March 11 and the number is expected to be even greater next month.

“Approximately 100,000 to 150,000 people turn up daily. All authorities are following the standard operating procedures for COVID-19,” Harbeer Singh, a government official part of the festival’s management committee, told Anadolu Agency.

According to the Health Ministry, more than 12 states in India have seen a surge in COVID-19 cases over the past few weeks, and pilgrims from these regions are very likely to be among those coming to Haridwar in April.

The ministry stressed that daily testing in Haridwar has to be “significantly increased” as the current pace would not be enough to cover the massive footfall.