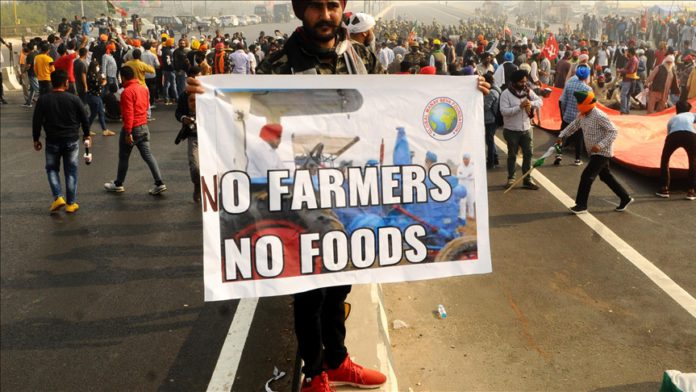 The Indian government and farmer unions made progress Wednesday in the sixth round of talks over new farm laws, with the sides reaching a consensus on two out of four issues.

Three agriculture reform laws passed by parliament in September have sparked protests, with thousands of farmers camping at the borders around the capital New Delhi demanding their rollback.

On Wednesday afternoon, representatives of farmer unions met with government ministers to resolve the issues after five rounds of talks failed to break the deadlock.

By evening, both sides said the meeting had ended on a “positive note” and talks would continue on Jan. 4.

“There were four points on the agenda today, out of which two points have been agreed,” said Agriculture Minister Narendra Singh Tomar.

While a consensus has been reached on two issues, discussions on the main demands of farmers — to repeal the three laws and also guarantee the minimum support price (MSP) –will continue.

The MSP protects farmers from price shocks in case of a bad crop year.

Darshan Pal, a farmer leader, said there were two issues on which the government agreed — one about the electricity bill and another about the penalty on stubble burning.

“There were positive discussions on the three laws and also on the MSP. It will continue in the next round of talks on Jan. 4,” he said.

Another farmer leader, Jagjit Singh Dallewal, said there was a “positive shift in the government’s attitude” during the meeting and the farmer groups have decided to postpone Thursday’s tractor march.

The farm leaders, however, have said that the protests will continue until their demands are met.

A statement issued by the government quoted Tomar as saying that “both sides need to take steps forward to arrive at an amicable solution.”

“On the unions’ demand for the repeal of farm laws, the minister said this too can be referred to a committee which will study the constitutional validity and propriety, keeping in mind the welfare of farmers. Regarding the Air Quality Management Ordinance and the Electricity Amendment Bill, Shri Tomar said that suggestions of the farmers’ unions have been agreed to in principle,” the statement said.

– Why are farmers protesting?

In September, the Indian government announced “three agricultural reforms” for farmers, which farmers believe will further exploit them and threaten the country’s food security.

The new reforms allow large companies to buy produce from farmers directly. In India, farmers usually sell their produce at local state-registered markets that ensure them a minimum support price which protects them from price shocks in case of a bad crop year.

Farmers believe that in the absence of state regulators, big corporations will exploit them. The new laws also include the promotion of contract farming and lifting a ban on the storage of potatoes, onions and pulses.

While the Indian government is trying to resolve the matter through talks and several rounds of talks have taken place, there has been no conclusion yet.