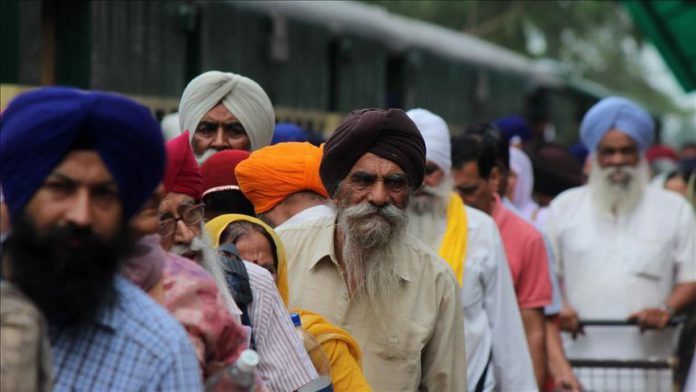 Thirty-six years after the Indian army stamped out the Sikh militancy from the holy Golden Temple in Amritsar, the region is once again heading towards instability as Sikh leaders demand a separate nation.

Addressing the media earlier this week, Giani Harpreet Singh, the head of Akal Takht, the highest temporal seat of the Sikh faith, said that all Sikhs want to see a separate Sikh nation “Khalistan.”

Official figures say the operation saw 83 military deaths and 439 deaths of civilians and militants as reported by local media. The riots that followed killed over 2,733 Sikhs in Delhi alone, according to the Human Rights Watch data.

“If the government gives us Khalistan, what more can we ask for? We shall accept it. Every Sikh wants Khalistan,” he said talking to the media.

The Jathedar [Head] then went on to clarify: “Guru Nanak Dev Ji had laid the foundation of Begampura. Guru Hargobind Singh founded Akal Takht. It is our great sovereign commitment.”

Installed as the Akal Takht Jathedar in October 2018, Giani Harpreet Singh is known for speaking his mind on controversial issues. He is working on his PhD in the comparative study of teachings of Quran and Guru Granth Sahib, the holy scripture of Sikhs.

Last August, Singh had called for the protection of Kashmiris after the abrogation of Article 370, which revokes the special status of Indian-administered Jammu and Kashmir.

With activists joining in from the UK and Canada, the “National Sikh Youth Federation” (NSYF), a group of young Sikh supporters of the “Khalistan movement” has started a Twitter campaign.

“On the 7th of June, the army targeted the Sikh Reference Library – 20,000 priceless, rare artifacts were reduced to ashes. This was a deliberate attack to permanently destroy Sikh history & culture as part of the genocide,” tweeted the NSYF, asking people never to forget 1984.

During the week-long observation of the Operation Bluestar, the members of the Akal Takht have been raising pro-Khalistan slogans. Some members even tried to force themselves into the Golden Temple to observe the operation’s anniversary, but were stopped by the police due to COVID-19 lockdown.

Since the onus of the decision to launch the operation lied with the then-Prime Minister Indira Gandhi, a hate campaign started against her. On Oct. 31, 1984, five months after the operation, Gandhi was assassinated by her two Sikh bodyguards in Delhi. The killing of Gandhi led to the 1984 anti-Sikh riots, which killed over 3,000 Sikhs and is seen as the “Black Day” among the community.

The Sikh-centric political party in India, Shiromani Akali Dal, observed the deaths of the bodyguards who assassinated Gandhi as “martyrdom” on Oct. 31, 2008. Ever since, the date has been observed as the martyr’s day.

While militancy has been growing among the Akal Takht followers, majority opposition Sikh leaders oppose the “Khalistan movement”.

“This is all politically motivated, these statements come during elections. Yes, the Sikhs have anger in them related to what happened and it is even seen as a “Black” time in Sikh history, but I don’t believe that any Sikh or Punjabi wants Khalistan,” said Singh.

In 2009, Jarnail Singh had thrown a shoe at the then-Home Minister P. Chidambaram for giving poll tickets to people who instigated the 1984 anti-Sikh pogrom.

Operation and its aftermath

Sikh activists and leaders have marked the Operation Bluestar as the “Ghallughara” (“genocide”) of the Sikhs. The operation was widely criticized by the Sikh community globally, who in retaliation started to resign from their government jobs and some even returned previously received gallantry awards.

Talking to Anadolu Agency, Santokh Singh, who lost his father and grandfather in the 1984 riots, told about the horrors his family had to go through.

“They were killing every adult Sikh man. Thousands were killed. My father, grandfather, and a few others went to hide in a nearby shop. The rioters came looking for them at home, then in a fit of rage, burnt down all the shops. All the hiding men died,” said Singh.

Singh was 4 years old when his father was killed. His then-pregnant mother took him along with his elder sister door-to-door to save their lives.

“Mother made me wear my sister’s clothes and braided my long hair into two plaits to disguise me as a girl. They were killing all men and boys,” he stressed.

Now, 36 years later, Singh lives with his family and retired mother in the modest “Widow’s Colony”, where his mother had been given a small one-room apartment in compensation.