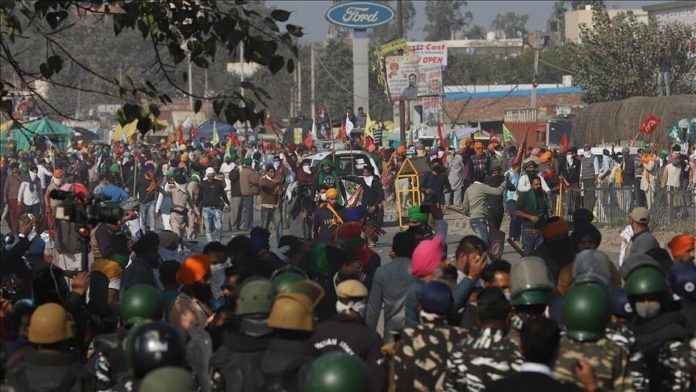 While 2020 in India began with widespread protests against the country’s controversial citizenship law, the year for the South Asian giant is also ending with massive public protests against new farming laws, with experts attributing the protests to ruling party’s ability to enact the new laws due to its overwhelming majority in parliament.

At the start of 2020, India was in the middle of widespread protests against the new Citizenship Amendment Act (CAA), seen as discriminatory against Muslims.

With protests over the controversial citizenship law subsiding due to the coronavirus pandemic as authorities banned large gatherings, another major protest that India recorded was against the recently approved farm laws.

For nearly a month, thousands of farmers have been camped at borders around the capital New Delhi, trying to get their voice heard by Prime Minister Narendra Modi and three recently approved agriculture laws rolled back.

Speaking to Anadolu Agency, Professor Navnita Chadha Behera, a political science faculty member at Delhi University, said the two protests witnessed in India this year are the result of the Bharatiya Janata Party (BJP)-led government passing laws which are “affecting a large number of people.”

In both houses of parliament, the National Democratic Alliance (NDA) government, which is led by the ruling party, enjoys a stronger position.

“It has to do with the laws that are coming from the NDA government,” said Behera, referring to the protests.

“Having come to power, they [the government] have taken major actions like the revocation of Article 370 [which had granted Jammu and Kashmir a special status] and the CAA.”

The BJP “has a mandate, funds and resources. There is no stopping them. The farmers’ agitation is still on, despite all odds. Let us see how it ends, if at all,” she said, adding the laws are the issues affecting “a large constituency of people.”

In February, New Delhi witnessed the worst riots in decades, which turned violent on the day that US President Donald Trump started a two-day maiden trip to India. Over 50 people were killed and hundreds injured. The riots were triggered by the citizenship law.

“We have been a country that has talked about unity and diversity together in a single phrase. Now this diversity is being challenged and questioned…We are a federal state, and this federal nature must be respected. Now, laws are bringing in more centralized control, demeaning or ignoring the federalism of our states,” she told Anadolu Agency. “The demonstrations are continuing because individuals are unhappy.”

According to political commentators, the Indian government’s introduction of laws without prior consultations has led to a trust deficit among people, which then turns into protests.

“In a democracy, people expect that not only the majority, but the voice of the minority will also be heard…We have seen the Indian government is using brute majority in the parliament to muzzle through bills, ordinances, without any respect for due deliberation, discussions,” said Sarthak Bagchi, a political scientist and faculty member at Ahmedabad University’s School of Arts and Sciences.

He said in two major protests this year, the government has failed to show earnest efforts to resolve the issues.

“The government has failed to place enough trust among the people. That is why we are seeing people protest on the road,” he told Anadolu Agency

As 2020 is about to end, activists want the government to debate and consult.

“We need to start listening to the people. We are hoping the New Year will make the government say ‘let’s debate and consult,’” said Adige.

The ruling party, however, says both protests were the result of “opposition parties misleading them.”

“The two protests are very different…[But] one thing in common is that both times, the people were misled by opposition parties. When the CAA happened, it was for illegal immigrants, and people were misled. Again, the [new farm] bills were passed for the benefit of farmers,” BJP’s National spokesman Syed Zafar Islam told Anadolu Agency.

“Everything will die down because we are engaging with everyone and we are giving the clarification.”

He said the government is working for the betterment of the people.

“We have the support of people and will continue to serve the people of the country.”

“Protests over the citizenship act and farm bills happened because the bills were passed in parliament without debate, discussion and deliberations through unconstitutional means,” said Congress spokeswoman Shama Mohamed.

“Democracy in India is being crushed day by day,” she told Anadolu Agency.

“The press is intimidated, judiciary subjugated, [there is a] violation of fundamental rights, minorities [are being] harassed,” Mohamed added.