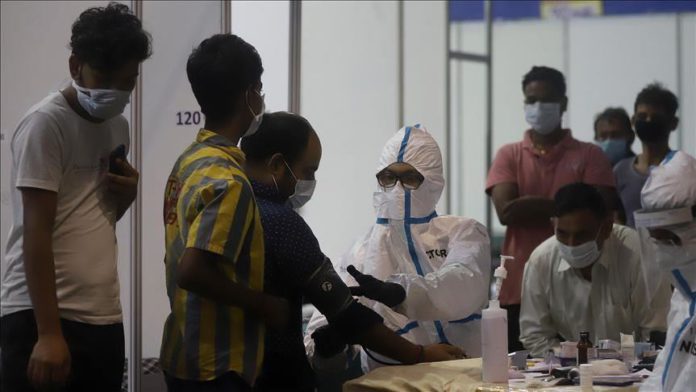 India’s novel coronavirus case count on Sunday exceeded 7.8 million after it registered 50,129 infections over the past day, official figures revealed.

The data confirmed at least 578 more fatalities over the last 24 hours — the lowest in over two months — bringing the death toll in the country to 118,534.

Over 7 million patients have recovered from the disease, including 62,077 in the past day, pushing the recovery rate to 90%. The total number of active cases now stands at 668,154.

Daily cases in India have been on the decline since peaking at over 90,000 in September.

The Health Ministry said on Twitter that four states accounted for more than half of total recovered cases, while also making up about 44% of the active caseload.

Case numbers are highest in the southern states of Kerala and Karnataka, as well as the western Maharashtra, eastern West Bengal and country’s capital Delhi.

Health Minister Harsh Vardhan urged the public to adhere to COVID-19 measures during festivals as the country prepares to mark the Hindu festival Dussehra on Sunday.

“The next three months are crucial in determining the COVID situation in the country due to onset of winters and many festivals […] If people follow COVID appropriate behaviors then the fight against coronavirus is no rocket science,” he said.

COVAXIN, India’s COVID-19 indigenous vaccine, was approved for Phase 3 clinical trials by the Drug Controller General of India (DCGI), as confirmed by a statement from the company, Bharat Biotech.

The Hyderabad-based firm is developing the vaccine in collaboration with the Indian Council of Medical Research and National Institute of Virology (NIV).

Across the world, COVID-19 has claimed more than 1.14 million lives in 189 countries and regions since last December.

Over 42.56 million cases have been reported worldwide, with recoveries exceeding 28.7 million, according to figures compiled by the US’ Johns Hopkins University.