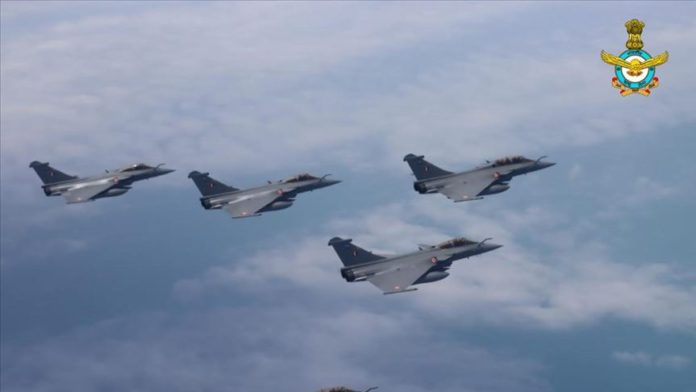 India on Wednesday received the first batch of five Rafale jets from France after years of political controversy.

The jets arrived at the Indian Air Force (IAF) base in the northern Haryana state this afternoon, Defense Minister Rajnath Singh announced.

“The Birds have landed safely in Ambala. The touch down of Rafale combat aircrafts in India marks the beginning of a new era in our Military History. These multirole aircrafts will revolutionise the capabilities of the @IAF_MCC,” Singh said in a series of tweets.

He went on to say the aircraft’s weapons, radar and other sensors were among the best in the world.

“The Rafale jets were purchased when they fully met the operational requirements of the IAF. The baseless allegations against this procurement have already been answered and settled,” he added, in a jibe at the opposition.

The aircraft have arrived amid heightened tensions between New Delhi and Beijing with a border standoff in the Himalayan Ladakh region.

A day before the landing, security was beefed up in the area and a gathering of more than four people was prohibited. Local police also warned people against gathering on rooftops to take pictures of the landing.

The multi-billion dollar deal to buy the French warplanes had triggered a political debate in the country,with the main opposition Congress Party accusing Prime Minister Narendra Modi of making the purchase at a price three times higher than what had been negotiated in 2014, when the Indian National Congress party was in power.

The Congress party, now the main opposition party in the country, has demanded Modi be investigated for his role in the deal.

On Wednesday, the party again targeted the Mod-led ruling Bharatiya Janta Party (BJP) over the pricing of the jets.

“We congratulate the Indian Air Force on receiving the Rafale jets. […] The stark difference between the Congress & BJP deal reveal the BJP’s scam,” the party tweeted on Wednesday afternoon.

“The Congress Rafale purchase would have ensured India receives 126 jets instead of BJP’s 36,” it added.

The Supreme Court in November last year rejected all petitions related to the Rafale jet deals. In 2018, the top court exonerated the government on allegations of irregularities in the procurement of 36 Rafale fighter jets by India from France.