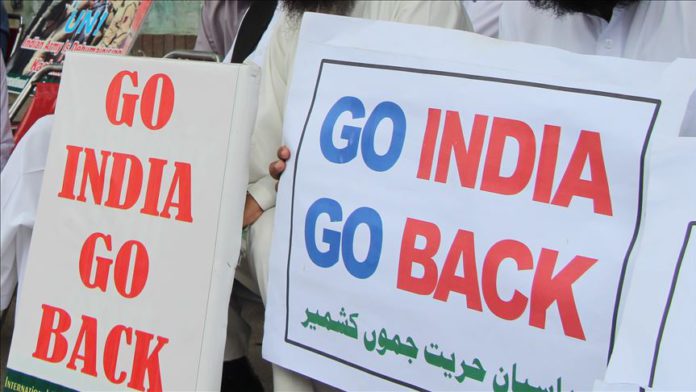 Pakistan-administered Kashmir’s President Sardar Masood Khan on Tuesday accused India of pushing the region to the “brink of war through warmongering.”

In a message on the eve of the first anniversary of New Delhi’s move to scrap the semi-autonomous status of Indian-administered Kashmir, Khan urged India to halt alleged ceasefire violations along the de-facto border.

“This past year, the people of the Indian-occupied Jammu and Kashmir, have suffered most grievously. On Aug. 5 last year, 900,000 Indian occupation forces invaded Kashmir and re-occupied it. Ever since they have been brutalizing the people and colonizing the territory,” he said in a video statement.

The Indian “occupation” army, he alleged, had killed hundreds of young men, incarcerated thousands of boys, and forcibly disappeared Kashmiris.

“All pro-freedom leaders are under Illegal detention. Concentration camps have been set up in the IOJK and India to force political activists to discard their quest for liberty,” he added.

India also launched a program for the settlement of Hindus in the Muslim-majority region in order to change its demographics, he said.

“The scale at which these atrocities are going on have been rightly called genocide, crimes against humanity and war crimes. Kashmiris are being exterminated; they are being made aliens in their own land, homeless in their own homeland,” he added.

He regretted that with the exception of China, Turkey, Malaysia, Iran and West European countries, the response of the most powerful nations had been “disappointing and faltering”.

On Aug. 5 last year, the Indian government scrapped the country’s only Muslim-majority state with its autonomy. Jammu and Kashmir was also split into two federally administered territories.

Ahead of the first anniversary of this controversial move, the Indian government has imposed curfew in parts of Kashmir, which critics say stems from the government’s fear of mass protests.