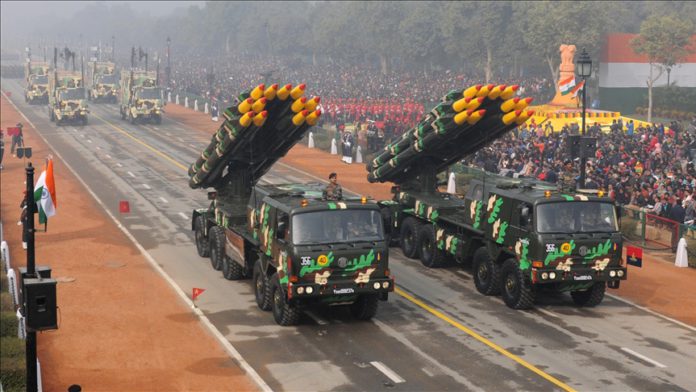 India and Pakistan, South Asia’s nuclear neighbors, conducted 26 missile tests in 2021, making it a year of intense arms rivalry. While India tested 16 ballistic and cruise missiles, Pakistan tested 10 missiles with nearly identical capabilities in a tit-for-tat response. This equates to two missile tests in a month.

According to India’s Defense Ministry, trials for Long-Range Surface-to-Air Missiles (LRSAM) for its navy have also concluded. The missile system has been jointly developed by India’s Defense Research Development Organization (DRDO) and Israel’s Aerospace Industries (IAI).

India also conducted two flight tests of the Agni P, a new generation nuclear-capable ballistic-canisterized missile with a range capability of 1,000 km to 2,000 km. The country ended the year by conducting a maiden flight test of surface-to-surface missile Pralay. The missile is powered by a solid-propellant rocket motor and many new technologies. With a range of 150-500 km, it can be launched from a mobile launcher and its guidance system includes a state-of-the-art navigation system and integrated avionics.

Pakistan responded by testing the Shaheen III and Shaheen 1A surface-to-surface ballistic missiles with ranges of 2,750 km and 900 km, respectively. In response to India’s BrahMos cruise missile, Pakistan tested the Babur Cruise Missile IA, which has a range of 450 km, twice this year, according to data collected from the website of Pakistan’s Inter-Services Public Relations (ISPR) – the media wing of the Pakistan armed forces.

The following is a chronology of the two South Asian neighbors’ armament tests in 2021:

Jan. 21: India conducts captive and releases trial of the Smart Anti-Airfield Weapon (SAAW). This is a 125-kilogram class smart precision-guided weapon capable of engaging ground enemies airfield assets such as radars, bunkers, taxi tracks, runways, etc. up to a range of 100 km.

Feb. 14: Flags off Long Range Surface to Air Missiles (LRSAM), which is jointly developed by India and Israel to equip the latest Indian Navy ships. This state of art weapon system is designed with an active radio frequency (RF) seeker that can identify, track, engage and destroy the target with high kill probability.

March 5: A flight demonstration based on Solid Fuel Ducted Ramjet (SFDR) technology, as a step towards developing long-range air-to-air missiles. At present, such technology is only available in a handful of countries around the world.

June 24 and 25: Test-fire of an extended-range version of artillery rocket systems, from a Multi-Barrel Rocket Launcher (MBRL). Launch of 25 enhanced Pinaka rockets in quick succession against targets at different ranges.

June 28: Flight test of a new generation nuclear-capable ballistic missile Agni P, which has the new generation advanced variant of the Agni class of missiles. It is a canisterized missile with a range of 1,000 km to 2,000 km.

July 21: Test-fire of a new generation Akash Missile (Akash-NG) – a surface-to-air missile. The Akash-NG weapon system is a force multiplier for the air defense capability of the Indian Air Force.

Oct 29: Flight test of the long-range bomb (LRB) from an aerial platform. The LRB is designed and developed in collaboration with other Defense Research Development Organization (DRDO) laboratories by Research Centre Imarat (RCI), a laboratory in Hyderabad.

Nov. 3: Two flight tests of the smart anti-airfield weapon of two different configurations based on satellite navigation and electro-optical sensors. The electro-optical configuration of the system is equipped with imaging infra-red (IIR) seeker technology, which enhances the weapon’s precision strike capability.

Dec. 7: Vertical launch of a short-range surface to air missile from a vertical launcher against an electronic target at a very low altitude. The launch aims to validate the integrated operation of all weapon system components, including the vertical launcher unit with the controller, canisterized flight vehicle, weapon control system, etc, for future missile launches from ships.

Dec. 8: Test of the air version of the BrahMos supersonic cruise missile from the supersonic fighter aircraft Sukhoi 30 MK-I. It clears the serial production of air-version BrahMos missiles.

Dec. 11: Tests of Pinaka Extended Range (Pinaka-ER), Area Denial Munitions (ADM), and fuzes at various test ranges. The Pinaka-ER is the upgraded version of the Pinaka, which has been in service with the Indian Army for the last decade.

Dec. 13: Launch of supersonic missile-assisted torpedo system, which is a next-generation missile-based standoff torpedo delivery system. This canister-based missile system consists of advanced technologies such as two-stage solid propulsion, electromechanical actuators, and precision inertial navigation. The missile is launched from a ground mobile launcher and it can cover a range of distances.

Dec. 18: Test of Agni P, a new generation nuclear-capable ballistic missile. Various telemetry, radar, electro-optical stations, and downrange ships positioned along the eastern coast tracked and monitored the missile’s trajectory and parameters. The Agni P is a canisterized two-stage solid-propellant ballistic missile with dual redundant navigation and guidance system. This second flight test proves the reliable performance of all the advanced technologies integrated into the system.

Dec. 18: Flight demonstration of the controlled aerial delivery system of 500 kg capacity. The weapon system drops payloads up to 500 kg at a predetermined location by using maneuverable capabilities of the ram-air parachute (RAP) and global positioning system for the coordinates, altitude, and heading sensors during its flight.

Dec. 22: Maiden flight test of surface-to-surface missile Pralay. The missile is powered by a solid-propellant rocket motor and many new technologies. The missile has a range of 150-500 km and can be launched from a mobile launcher. The missile guidance system includes a state-of-the-art navigation system and integrated avionics.

Dec. 23: Test flight of the High-speed Expendable Aerial Target (HEAT) Abhyas. This unmanned aerial target system aims to meet the requirement of aerial targets. The aircraft is controlled from a ground-based controller and Inertial Navigation System along with the Flight Control Computer.

Jan.7: Pakistan conducts a test flight of the Fatah-1 (guided multi-launch rocket system) capable of delivering a conventional warhead up to a range of 140 km.

Jan.20: Flight test of the Shaheen-III surface-to-surface ballistic missile, having a range of 2,750 km. The test flight revalidates various design and technical parameters of the weapon system.

Feb.3: Training launch of the Ghaznavi surface-to-surface ballistic missile capable of delivering nuclear and conventional warheads up to a range of 290 km.

Feb.11: Test launch of Babur Cruise Missile IA, with a range of 450 km. The missile is capable of engaging targets on land and at sea with “high precision.”

March 26: Flight test of the Shaheen-1A surface to surface ballistic missile having a range of 900 km.

Dec 21: Test-fire of “enhanced range” version of the Babur Cruise Missile 1B.