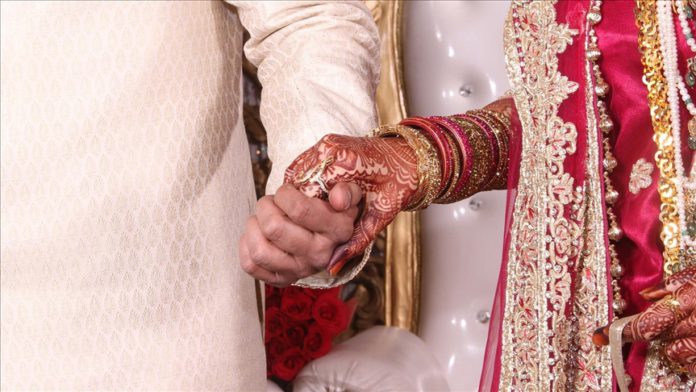 For D. Ahmed, 35, a resident of India’s northern Uttar Pradesh province, it was not easy to convince his family three years ago to allow him to marry a Hindu woman.

The marriage took place and the couple says they are living happily.

“There was some reluctance from the family initially, but they finally got convinced. We are happy living together. We never faced any problem,” Ahmad, a government employee told Anadolu Agency.

While this couple did not face any issue in interreligious marriage, it may not be the case now in current circumstances.

Hindu right-wing has coined the term “love jihad”, to describe the marriage of a Hindu girl to a Muslim boy. They are accusing Muslim boys of luring Hindu women and then converting them to Islam.

The Uttar Pradesh provincial government has now proposed a law to check “unlawful religious conversions” and “interfaith marriages with the sole intention of changing a girl’s religion”. A jail term upto 10 years has been stipulated for the boy.

Activists fear this law will damage India’s secular and pluralistic character – the basis of its constitution.

“In the 21st century India, just as we thought we were making inroads into women empowerment, personal liberty and truly progressing as a nation in thought and deed here comes a bill that seeks to curtail rights to love,” said rights activist Saira Shah Halim.

Speaking to Anadolu Agency, she asked the Supreme Court of India should take suo moto cognizance of the proposed legislation that criminalizes love rather than hate.

He said that it is a political instrument for Rashtriya Swayemsevak Sangh (RSS) – a patron organization of Hindu right-wing groups including the ruling party — to evangelize and radicalize its core constituency.

Lawyers, however, said such laws will be challenged in the court, as they are against the basis of the Indian constitution.

Describing the term “love jihad” as a concocted and fanciful concept created by vested political interests, he said it is aimed at dividing the society and created disturbances.

“We can extend support to a law being enacted against love jihad only on the condition that its beginning should be made from the two big love jihadis sitting in the central government. So that two Muslim girls can then marry them and the action should also be taken against all BJP leaders and their family members who have married outside their religion, “he demanded.

Earlier this year, the Indian government said in parliament, that the term ”love jihad” is not defined under existing laws and no case has been reported by any central agency.

As the BJP-ruled states are registering cases against Muslim men based on complaints by family of girls, the courts have mostly dismissed them.

In 2018, the Supreme Court overturned the decision of the Kerala High Court which had annulled the marriage of Hadiya, a Kerala based girl who converted to Islam and married a Muslim man.

The case was also described as “love jihad” by her father, who filed a plea in 2016 alleging that her daughter was forced to convert to Islam.

The High Court in Uttar Pradesh ordered the cancellation of a case filed against a Muslim man by the parents of his wife, who converted to Islam last year to marry him. The court noted Interference in a personal relationship would constitute a serious encroachment into the right to freedom of choice of the two individuals.

“We do not see Priyanka Kharwar and Salamat as Hindu and Muslim, rather as two grown-up individuals who out of their own free will and choice are living together peacefully and happily over a year…,” the court said in its judgment on Nov. 11.

Opposition parties in India have blamed the ruling party for using “love jihad” to divide the nation.

“Love Jihad is a word manufactured by BJP to divide the nation and disturb communal harmony. Marriage is a matter of personal liberty, bringing a law to curb it is completely unconstitutional and it will not stand in any court of law. Jihad has no place in Love,” said Ashok Gehlot, chief minister of the western province of Rajasthan and also a senior Congress party leader.

The ruling party, however, says they are not against interfaith marriages but oppose those marriages where the aim is only to change a girl’s religion and cheating.

“This is a law for those boys who change their names, with conspiracy, have different agendas and use love. Marriage can take place through a special marriage act. But, for the sake of marriage, conversion [religion] takes place…we feel there is a conspiracy,” Deepak Vijayvargiya, BJP spokesperson in Madhya Pradesh told Anadolu Agency.

Siddharth Nath Singh, a minister in the BJP-led government in Uttar Pradesh told TV channels that law has been brought so that issues of “forceful conversions, coercions or elopements which get reported” are strictly dealt with as per law.

But there are fears that the law would be misused if marriage is against the family or societal approval. Indian statute book allows interfaith marriage under the Special Marriage Act enacted in 1954.

“It [law] is an attempt to build a narrative over something which does not exist. It [love Jihad] is a very stupid thing and it is completely a non-issue,” said Rama Shyam, a resident of Mumbai who has married a Muslim man eight years ago.

“Such rules like Uttar Pradesh has brought are bound to be misused and now interreligious marriages would face severe legal scrutiny, making people’s choice impossible,” she said.