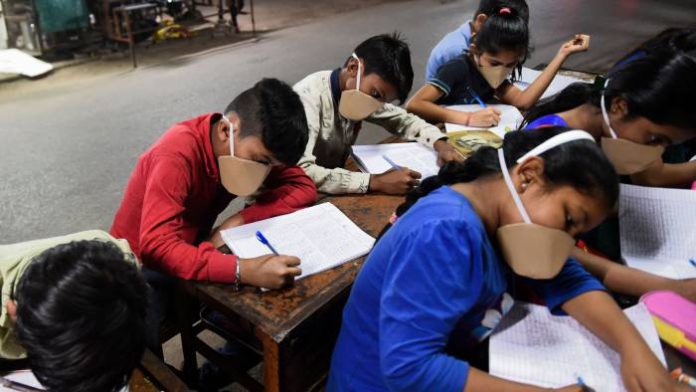 Politicians and academics are divided in India about a new National Education Policy [NEP] 2020 that was approved last week and replaces a 34-year-old National Policy on Education (NPE).

The policy mentions teaching up to at least grade 5 in the mother tongue or regional language and a focus on “curriculum to integrate Indian culture and ethos at all levels.”

However, there are mixed reactions regarding the new policy.

“On the whole, my sense about the policy is actually it contains many sensible suggestions. The apprehensions like BJP is bringing this policy and it could be saffronisation of education … fortunately this policy is not all about that. I think it is a step forward because many sensible things are there. At the same time I remain deeply skeptical about its implementation by this regime,” Yogendra Yadav, a former academic and national president of political organization Swaraj India told Anadolu Agency, referring to earlier fears that the ruling Bharatiya Janata Party may bring some right-wing Hindu policies to education.

“The higher education in India will now be holistic and multidisciplinary with a shared focus on science, arts and humanities,” she said.

But Pankaj Kumar Garg, a teacher at a college affiliated with New Delhi University and also convenor of Indian National Teachers Congress, said there are many problems in the policy.

“The policy has advocated major reforms in education, but as always, the devil lies in the details, and we will see how to get the NEP 2020 translated to action on the ground, true to the spirit of the reforms envisaged to empower the students in the country, to discover and fully develop their unique potentials,” Rupamanjari Ghosh, Vice-Chancellor of Shiv Nadar University in Uttar Pradesh was quoted by local news agency Press Trust of India.

According to the policy document, the NEP “envisions an education system rooted in Indian ethos that contributes directly to transforming India, that is Bharat, sustainably into an equitable and vibrant knowledge society.”

“The Policy envisages that the curriculum and pedagogy of our institutions must develop among the students a deep sense of respect towards the Fundamental Duties and Constitutional values, bonding with one’s country, and a conscious awareness of one’s roles and responsibilities in a changing world,” it said.

Many organizations affiliated with the Rashtriya Swayamsevak Sangh (RSS)- powerful Hindu far-right group and ideological inspiration for the ruling Bharatiya Janata Party (BJP), have welcomed the NEP saying their suggestions were included, including remaining in India’s Ministry of Human Resource Development.

“Almost all the things which were suggested by Bharatiya Shikshan Mandal have found place in NEP. We have been demanding renaming the HRD [Human Resource Development] ministry to education ministry and cultural ministry. They have changed the name to the education ministry,” Shankaranand BR who is All India Joint Organising Secretary, BSM told Anadolu Agency. “The NEP – 2020 would prove itself an instrumental in making Bharat Aatmnirbhar. The political independence we got on 15th August 1947 but the academic independence we got on 29th July 2020”.

He said the inclusion of “Bharatiya knowledge system, thrust for language and culture, will imbibe the values of life, constitutional values and life skills in new generation.”

“We welcome the policy. There is an integrated approach in the policy and It has talked about the development of students from all sections of the society. It has stressed on local culture, local skills, and traditional arts. Local, state and national has been combined. It has been inculcated in this. The biggest demand of ours was to change the name of the ministry, which has been done. There is also focus about promotion of Indian languages,” Atul Kothari, national secretary of the Shiksha Sanskriti Utthan Nyas told Anadolu Agency

India’s Samajwadi Party (SP) claimed the objective of the new policy was to “implement the RSS agenda.”

“The objective of the new education policy announced by the centre is to implement the agenda of the RSS. According to this agenda, the curriculum will now be presented in a special colour to mould the new generations,” SP President Akhilesh Yadav said in a statement, according to the Press Trust of India.

Modi said the framing of NEP 2020 will be remembered as a shining example of participative governance.

“I thank all those who have worked hard in the formulation of the NEP 2020. May education brighten our nation and lead it to prosperity,” he tweeted.

“Respecting the spirit ‘Ek Bharat Shreshtha Bharat’, the NEP 2020 includes systems to promote Indian languages, including Sanskrit. Many foreign languages will also be offered at the secondary level. Indian Sign Language (ISL) will be standardised across the country.”